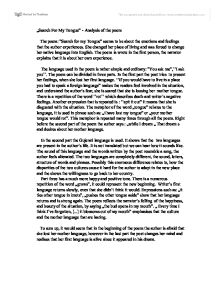 "Search For My Tongue" - Analysis of the poem The poem: "Search for my Tongue" seems to be about the emotions and feelings that the author experiences. She changed her place of living and was forced to change her native language into English. The poem is wrote in the first person, the narrator explains that it is about her own experience. The language used in the poem is rather simple and ordinary: "You ask me",''I ask you''. The poem can be divided in three parts. In the first part the poet tries to present her feelings, when she lost her first language. ...read more.

The metaphor of the word "tongue" relates to the language, it is used in phrase such as: "i have lost my tongue" or "your mother tongue would rot". This metaphor is repeated many times through all the poem. Right before the second part of the poem the author says : "while I dream " That dreams and desires about her mother language. In the second part the Gujerati language is used. It shows that the two languages are present in the author's life. It is not translated but we can hear how it sounds like. The sound of this language and the words written by the poet resemble a song, the author feels alienated. ...read more.

Writer's first language returns slowly, even that she didn't think it would. Expressions such as: "it ties other tongue in knots", "pushes the other tongue aside" show that her language returns and is strong again. The poem reflects the narrator's felling of the happiness, and beauty of the situation, by saying "the bud opens in my mouth". " Every time I think I've forgotten, [...] it blossoms out of my mouth" emphasises that the culture and the mother language that are lasting. To sum up, it would seem that in the beginning of the poem the author is afraid that she lost her mother language, however in the last part the poet changes her mind and realises that her first language is alive since it appeared in his dream. ...read more.