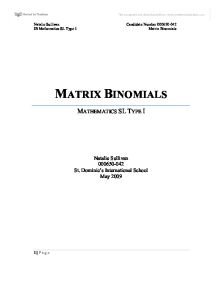 MATRIX BINOMIALS MATHEMATICS SL TYPE I Natalie Sullivan 000650-042 St. Dominic's International School May 2009 A matrix function such as and can be used to figure out expressions. By calculating and the values of X and Y can be solved for. . By following rules of multiplying matrices, this can be shown as =. Using we can conclude that = or. One can generalize a statement of a pattern that develops as the matrix goes on. The expression is as follows, =. The number 2 in the matrix comes from when the product of is solved for. The value of is twice the value of . The variable n represents what power the matrix is to, such as n = 2, 3, 4. We can now solve for the rest of the values of. = Further values of can be proven by the expression, = can be proven with the same expression by slightly changed. Since and are negative, we much change the expression as to meet the demands of and . ...read more.