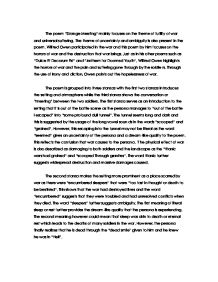 The poem "Strange Meeting" mainly focuses on the theme of futility of war and universal suffering. The theme of uncertainty and ambiguity is also present in the poem. Wilfred Owen participated in the war and this poem by him focuses on the horrors of war and the destruction that war brings. Just as in his other poems such as "Dulce Et Decorum Est" and "Anthem for Doomed Youth", Wilfred Owen highlights the horrors of war and the pain and suffering gone through by the soldiers. Through the use of irony and diction, Owen points out the hopelessness of war. The poem is grouped into three stanzas with the first two stanzas introduces the setting and atmosphere while the third stanza shows the conversation or "meeting" between the two soldiers. The first stanza serves as an introduction to the setting that it is out of the battle scene as the persona manages to "out of the battle I escaped" into "some profound dull tunnel". The tunnel seems long and dark and this is suggested by the usage of the long vowel sounds in the words "scooped" and "groined". ...read more.

The word "friend" also denotes familiarity which contradicts the idea that they were enemies in the war and were fighting each other. However, calling the vision "friend" shows that they had something in common which was they were once fighting in the war and now had died. Even the other soldier recognizes this as he had "stared with piteous recognition" at the persona when the persona "probed" the "encumbered sleepers". The theme of futility and hopelessness is further shown the "undone years" refers to the time that the soldiers lost in the war as well as their regret and years. Their unrealized dreams and potential is all the more emphasized by the word "hopelessness". This is similar to the Owen's poem "Disabled" where the youth in "Disabled" had "half his lifetime lapsed in the hot race". The theme of universal suffering is also brought up as the "hope (that) is yours, Was my life also" but in the end was dashed by the war. The vision regrets taking part in the war to forsake his dreams as it "grieves, grieves richlier than here". He feels that participating in the war was a waste and his hunting for the "wildest beauty" was more worth it as it "mocks the steady running of the hour" which meant it was eternal. ...read more.

This shows stagnation of the glory of the country. This emphasizes the theme of futility of war and the degradation of war. The theme of universal suffering is also brought up as the poem also shows a psychological struggle occurring within soldiers as they fight. The word "frowned" as the soldier "jabbed and killed" suggests a reluctance in fighting as it hints that the fighting is against the soldier's will and he thinks that it is wrong to kill. The theme is once again surfaced as the vision says "let us sleep now". This statement is ironic as there is no real rest for those who are still fighting in the war but only for those who are already dead. The hell above still exists on the battlefield and the "Hell" that they are in can offer them eternal sleep. In conclusion, the poem shows a supernatural, dream-like meeting between two soldiers who were enemies in the hellish war above but now are friends in "Hell". Their conversation shows the futility of war and the broken dreams and unfulfilled desires due to war. The hopelessness of war is further shown as soldiers die with unresolved conflicts in life. War too brings suffering to all due to the bloodshed and the widespread devastation and destruction. ...read more.