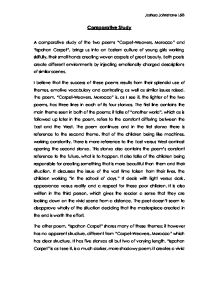 Comparative Study A comparative study of the two poems "Carpet-Weavers, Morocco" and "Ispahan Carpet", brings us into an Eastern culture of young girls working skilfully, their small hands creating woven carpets of great beauty. Both poets create different environments by injecting emotionally charged descriptions of similar scenes. I believe that the success of these poems results from their splendid use of themes, emotive vocabulary and contrasting as well as similar issues raised. The poem, "Carpet-Weavers, Morocco" is, as I see it, the lighter of the two poems, has three lines in each of its four stanzas. The first line contains the main theme seen in both of the poems; it talks of "another world", which as is followed up later in the poem, refers to the constant differing between the East and the West. The poem continues and in the first stanza there is reference to the second theme, that of the children being like machines, working constantly. There is more reference to the East versus West contrast opening the second stanza. ...read more.

The poem says that the carpet is all that they know, the poet says this in the words, "O, eyes whose whole horizon is the carpet". The poem goes on to sound like a line from a movie stating, "Who can unravel/ The worlds weaving?" Which is used to make a statement saying just what is all this about, the poet seems confused here. The poem ends in a powerful two lines making a statement about the thinness of the children's "greenstick shoulder" in comparison to the poet's "swollen hand" as well as the strong disapproval as the child looks at the poet with a "speaking darkness" Both poems are clear in the fact that it is the young girls weaving and not the boys; this is a "traditional" aspect of the Eastern world. The constant recurrence of the seeming clash between East and West is a big theme in both poems. In "Carpet-Weavers, Morocco" there is a line that says "They watch their flickering knots like television" which hints that these Eastern girls are transfixed by their "knots" as Western children are by television. ...read more.

In "Ispahan Carpet" there is also the "f" sound in "flickering fire". In both poems there is also the slithering "s" sound in words like "sensuous" and "servants of the mosque" the sound makes you think of the slithering, weaving, knotting of the girls at work; this could also have some relation to the Arab pastime of snake charming. In "Ispahan Carpet" there is repeating "b" alliteration in the first stanza this adds to the dark, slow movement of the poem. In contrast "Carpet-Weavers, Morocco" has the accentuated repeating "f" giving the poem a quick flittering feel. These two poems have raised the issues of child labour in a culture where the creation of beautiful objects, the carpets - the end result, justifies the means. However the difference or similarity in these poems is not so much the use of imagery as the differing opinions on whether it is a good and useful experience or not, I believe both poets have achieved their objectives, creating vivid images of the children working and the ultimate values of their sacrifice. ?? ?? ?? ?? Joshua Johnstone L6IB ...read more.