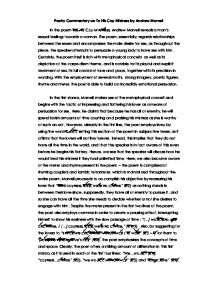 Poetry Commentary on To His Coy Mistress

Poetry Commentary on To His Coy Mistress by Andrew Marvell In the poem To His Coy Mistress, Andrew Marvell reveals a man's sexual feelings towards a woman. The poem, essentially, regards relationships between the sexes and encompasses the male desire for sex, as throughout the piece, the speaker attempts to persuade a young lady to have sex with him. Certainly, the poem itself is rich with metaphysical conceits as well as its depiction of the carpe diem theme, and is notable for its playful and explicit treatment of sex, its full control of tone and pace, together with its precision in wording. With the employment of several motifs, strong imagery, poetic figures, rhyme and meter, the poet is able to build an incredibly emotional persuasion. In the first stanza, Marvell makes use of the metaphysical conceit and begins with the tactic of impressing and flattering his lover as a means of persuasion for sex. Here, he claims that because he has all of eternity, he will spend lavish amounts of time courting and praising his mistress as she is worthy of such an act. However, already in the first line, the poet employs irony by using the word "Had", setting this section of the poem in subjunctive tense, as it affirms that the lovers will not live forever. ...read more.

for her to accept, he would be willingly to take things slower with her because "nor would [he] love at lower rate" (L.20). In the second stanza, Marvel opposes himself by altering his flattering approach to a fearful and threatening approach, as he now bases his tactic on the encroachment of time, and the thought that time will forever chase them, and admits that after all, they don't have all of eternity. Immediately, we can see that the romantic mood of the poem has changed as the first line of the section begins with the word "but". Key to the speaker's argument, the poet offers a metaphor in line 22 which refers to the power, speed and inevitability of time. A winged chariot does not exist, and relates to Roman mythology and Apollo's flying chariot: "time's winged chariot hurrying near". This metaphor enhances the saying that time flies, and adds a darker tone for this second section of the poem. Marvell proceeds to refer back to the first stanza of the poem, by mentioning how he would "yonder all before us lie / deserts of vast eternity" (L. 23-24), which could be the age the speaker would dedicate to worshiping his listener's "every part" (L.17). Here, the poet also emphasizes how time is limited, by comparing their lives to the "deserts of vast eternity" (L.24); from this comparison, we see how they're lives are merely fragments. ...read more.

The poet proceeds to emphasize the theme of seizing the moment, by telling her that they should "roll all our strength and all / our sweetness up into one ball / and tear our pleasures with rough strife" (L.41-43). Although iambic tetrameter is maintained throughout the entire poem, the use of meter in line 41 reflects the speaker's breathlessness, hence showing that the pace of the poem has increased. It is evident that the speaker is in a hurry also through the absence of punctuation, as there are no commas used, and the application of words which only contain one syllable. Now, we can see that the poet is reaching his concluding remarks as he begins the final rhyming couplet with the word "Thus" (L.45). Here, he finishes with the use of alliteration once again to impress his lover: "Thus... though" (L.45), "sun / stand still" (L.45-46) and "we will" (L.46). Finally, the poet concludes the poem by stating that "we cannot make our sun / stand still, yet we will make him run" (L.45-46), meaning that they'll try to maintain their passion in existence. All of this enforces the speaker's overall argument, and eloquently reveals that their current cares or troubles do not are not of great relevance as time is slowly gripping them both, hence pronouncing that they should seize the moment by giving into their ardent temptations. ?? ?? ?? ?? ...read more.