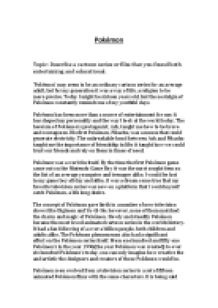 Pokmon has been more than a source of entertainment for me; it has shaped my personality and the way I look at the world today.

ï»¿Pokémon Topic: Describe a cartoon series or film that you found both entertaining and educational. ‘Pokémon’ may seem to be an ordinary cartoon series for an average adult, but for my generation it was a way of life, a religion to be more precise. Today I might be sixteen years old, but the nostalgia of Pokémon constantly reminds me of my youthful days. Pokémon has been more than a source of entertainment for me; it has shaped my personality and the way I look at the world today. ...read more.

By the time the first Pokémon game came out on the Nintendo Game Boy it was the most sought item on the list of an average youngster and teenager alike. I would be lost in my game boy all day and alike, it was a dream come true that my favorite television series was now on a platform that I could myself catch Pokémon, a life long desire. The concept of Pokémon gave birth to a number of new television shows like Digimon and Yu-Gi-Ho; however, none of them matched the charm and magic of Pokémon. ...read more.

Pokémon soon evolved from a television series to a set of fifteen animated Pokémon films with the same characters. It is being said that the creators of Pokémon are now deciding to produce a full-length feature film, an experience for which I cannot wait. Pokémon has imbibed in me values such as love, kindness, and friendship, care and respect from a very young age. Its influence on me is unfathomable and I hope that even the future generation would get a chance to explore the remarkable and exciting world of Pokémon, because it would be a pity if they do. BY: VEDANT BATRA CLASS: IB-1 ...read more.