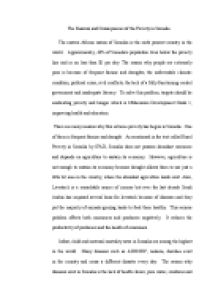 ﻿The Reasons and Consequences of the Poverty in Somalia The eastern African nation of Somalia is the sixth poorest country in the world. Approximately, 43% of Somalia's population lives below the poverty line and or on less than $1 per day. The reason why people are extremely poor is because of frequent famine and droughts, the unfavorable climatic condition, political crisis, civil conflicts, the lack of a fully functioning central government and inadequate literacy. To solve this problem, targets should be eradicating poverty and hunger which is Millennium Development Goals 1, improving health and education. There are many reasons why this extreme poverty has begun in Somalia. One of them is frequent famine and drought. As mentioned in the text called Rural Poverty in Somalia by IFAD, Somalia does not possess abundant resources and depends on agriculture to sustain its economy. However, agriculture is not enough to sustain its economy because drought allows them to use just a little bit area in the country, where the abundant agriculture lands exist. ...read more.

Since people don?t have any condoms, HIV spreads out and infects people. The people who have been infected by these diseases cannot get any treatment because there is no enough health care, hospital, doctors and nurses. If there is no treatment, death is inevitable. There is no national government in Somalia. More than 15 years without an effective central government, lawlessness and economic crisis led people to separate into different social groups and clans. The strongest clans have taken abundant agriculture lands, valuable properties etc? and it made weaker clans extremely poor. This extreme poverty has become widespread and large numbers of people are unable to acquire basic food requirements. As Prof. Ali Mahmoud Nur says, ?There is widespread food aid corruption, that is why I am calling for the establishment of a special food aid monitoring group ? this must include Somalis and the foreigners themselves?(Nur). The consequences of these events are civil wars and Somali pirates. According to a recent BBC report, Somali pirates seized a record 1,181 hostages in 2010, and were paid many millions of dollars in ransom. ...read more.

They can be a threat for innocent people in cruise ships and poor fishermen. They are usually successful to hijack ships and capture fisherman boots. This is why Somalian lands are very scary for people in the world. However, if UN makes deal with Somali pirates, maybe this problem can be solved. They are pirates because of poverty and if UN can suggest them some better conditions, they can accept. Therefore, both some Somalian people and innocent people can be far away from danger. In Somalia, educating people seems to be difficult but it is necessary. Especially mothers should be informed about diseases, pregnancy, healthcares and other things. Every year, almost infant mortality is 108.3 per 1000. It can be reduced by explaining them what they need to do. Also, children should be educated in schools about health. Otherwise, they are maybe affected by toxins when they play around. In conclusion, although the sixth poorest country Somalia has some troubles about their government, economics, civil wars, famine and drought, there are some solutions to make their lives better. To achieve that, some organizations and corporations can attempt to help them. ...read more.