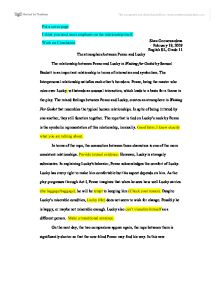 In this new circumstance, it is unclear which character is the leading body or the one truly in control. As the author states in a (the) stage directions, "Pozzo is blind...Rope as before, but much shorter, so that Pozzo may follow more easily" (87). With the textual support, (Don't say that) Pozzo is dependent on Lucky for direction, which further applies to the claim that Lucky is dependent on Pozzo for the same reason, despite the fact that the relationship is one of emotional dependence rather than physical dependence. What does the shortness of the rope imply? What is your opinion? Further in to the play, other stage directions indicate that Lucky and Pozzo fall down after they bump into Estragon. Lucky falls and drops everything and on the way down, he brings down Pozzo with him. ...read more.

Lucky reacts as before and gets up and no longer feels equal to his master (103). The length of the rope is not changed literally but the rope affects the relationship of dominance and submission. Vladimir and Estragon have a similar relationship in many ways, due to the certain amount of submission and domination in their interactions with one another. The submission and domination, however, is less valued and less implied than in the interaction between Pozzo and Lucky. Overall, the relationship of Pozzo and Lucky seems to be a necessary evil. They never seem to agree on much or even get along very well, but still seem to be two parts of a single person. Whenever their relationship is danger, they cease to function normally. Good overall essay but work on the evidence and conclusion ...read more.