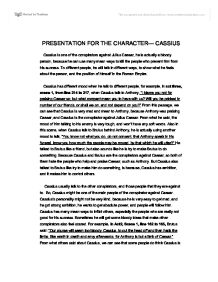 PRESENTATION FOR THE CHARACTER- CASSIUS Cassius is one of the conspirators against Julius Caesar, he is actually a bloody person, because he can use many mean ways to kill the people who prevent him from his success. To different people, he will talk in different ways, to show what he feels about the person, and the position of himself in the Roman Empire. Cassius has different mood when he talk to different people, for example, in act three, scene 1, from line 214 to 217, when Cassius talk to Anthony, "I blame you not for praising Caesar so; but what compact mean you to have with us? Will you be pricked in number of our friends, or shall we on, and not depend on you?" ...read more.

He talked to Brutus like a friend, but also sounds like he is try to make Brutus to do something. Because Cassius and Brutus are the conspirators against Caesar, so both of them hate the people who help and praise Caesar, such as Anthony. But Cassius also talked to Brutus like try to make him do something, is because, Cassius has ambition, and it makes him to control others. Cassius usually talk to the other conspirators, and those people that they are against to. So, Cassius might be one of the main people of the conspirator against Caesar. Cassius's personality might not be very kind, because he is very easy to get mad, and he got strong ambition, he wants to get absolute power, and people will follow him. ...read more.

From what others said about Cassius, we can see that some people do think Cassius is mean, and they don't really like him; some of the conspirators really think that Cassius is nice and have some good ideas; also, there're some people that against to Cassius face to face, like the people that are supporting Caesar, such as Anthony. Cassius is such a person with large ambition, and what he did to others might absolutely make some people mad, and that will make him won't be so peace in his life in the future. Also, he is a moody person, he knows hoe to talk to others well, what he need to do in different situation, and he likes to talk to others with the tone sounds like he is making others to do thing for him. So, in conclusion, I think he's a person with certain position, but still not satisfy. ...read more.