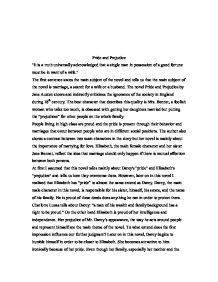 Pride and Prejudice "It is a truth universally acknowledged that a single man in possession of a good fortune must be in want of a wife." The first sentence states the main subject of the novel and tells us that the main subject of the novel is marriage, a search for a wife or a husband. The novel Pride and Prejudice by Jane Austen shows and indirectly criticizes the ignorance of the society in England during 18th century. The best character that describes this quality is Mrs. Bennet, a foolish woman who talks too much, is obsessed with getting her daughters married but putting the "prejudices" for other people on the whole family. People living in high class are proud and the pride is present through their behavior and marriages that occur between people who are in different social positions. ...read more.

On the other hand Elizabeth is proud of her intelligence and independence. Her prejudice of Mr. Darcy's appearance, the way he acts around people and represent himself are the main theme of the novel. To what extend does the first impression influence our further judgment? Later on in this novel, Darcy begins to humble himself in order to be closer to Elizabeth. She becomes attractive to him ironically because of her pride. Even though her family, especially her mother and the youngest sister Lydia, put her into a lower class, she remains a strong character, who supports the family but follows her own path. He began to wish to know more of her, and as a step towards conversing with her himself, attended to her conversation with others." ...read more.

Bennet got together, we can assume from their conversions. When they talk we get to know that their relationship is similar to that of Lydia and Wickham - Mr. Bennet married a woman he found sexually attractive but forgot to realize she had no intelligence. The last example of a marriage is of a different nature. The marriage between Mr. Collins and Charlotte is based on economics rather than on love or appearance. It was a common practice during Austen's time for women to marry a husband to save her from spinsterhood or to gain financial security. These marriages contributes to the theme that a happy and strong marriage takes time to build and must be based on mutual feeling, understanding, and respect. Hasty marriages will not survive and will lead to inevitable unhappiness. In Pride and Prejudice, Jane criticizes the elements of marriage and society that she finds disastrous. These are the conclusions of her observation of the people in her world. ...read more.