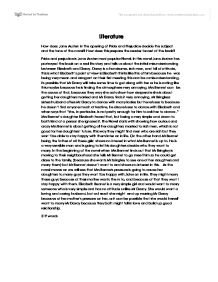 Literature How does Jane Austen in the opening of Pride and Prejudice decide the subject and the tone of the novel? How does this prepare the reader for rest of the book? Pride and prejudice is Jane Austen most popular Novel. In this novel Jane Austen has portrayed the book on a real life story and tells us about the initial misunderstanding between Elizabeth and Darcy. Darcy is a handsome, rich man, and full of attitude, this is what Elizabeth's point of view is Elizabeth thinks like this of him because he was being very mean and arrogant on their first meeting this can be a misunderstanding, its possible that Mr Darcy will take some time to get along with her or he is acting like this maybe because he is finding the atmosphere very annoying. ...read more.

Mrs Bennet's daughter Elizabeth heard that, but being a very simple and down to Earth kind of a person she ignored it. The Novel starts with showing how curious and crazy Mrs Bennet is about getting all her daughters married to rich men, which is not good for her daughters' future. This way they might find men who are rich but they won't be able to stay happy with them later on in life. On the other hand Mr Bennet being the father of all these girls' shows no interest in what Mrs Bennet is up to. He is a very sensible man and is going to let his daughters decide who they want to marry. ...read more.

As the novel moves on we will see that Mrs Bennets pressure is going to cause her daughters to marry guys they won't be happy with, later on in life. They might marry these guys because of their mother wants them to, and because of that they won't stay happy with them. Elizabeth Bennet is a very simple girl and would want to marry someone who is very simple and has no attitude unlike Mr Darcy. She would want a loving and caring husband, but as I see it she might end up marring Mr Darcy because of her mother's pressure on her, or it can be possible that she would herself want to marry Mr Darcy because they both might fall in love and build up good relationship. 519 words ...read more.