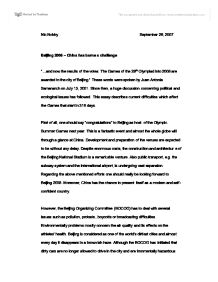 Nic Nobby September 26, 2007 Beijing 2008 - China has borne a challenge "...and now the results of the votes. The Games of the 29th Olympiad into 2008 are awarded to the city of Beijing." These words were spoken by Juan Antonia Samaranch on July 13, 2001. Since then, a huge discussion concerning political and ecological issues has followed. This essay describes current difficulties which affect the Games that start in 316 days. First of all, one should say "congratulations" to Beijing as host of the Olympic Summer Games next year. ...read more.

Moreover, China has the chance to present itself as a modern and self-confident country. However, the Beijing Organizing Committee (BOCOG) has to deal with several issues such as pollution, protests, boycotts or broadcasting difficulties. Environmentally problems mostly concern the air quality and its effects on the athletes' health. Beijing is considered as one of the world's dirtiest cities and almost every day it disappears in a brownish haze. Although the BOCOG has initiated that dirty cars are no longer allowed to drive in the city and environmentally hazardous plants have been moved, citizens still complain about sore throats and allergic reactions. ...read more.

During the present Women's World Cup in soccer reporters have confirmed that they have been spied on by governmental groups. All in all, it could be assumed that the frightened Olympic Spirit will turn away from the opening ceremony on August 8, 2008. In conclusion, one can say that not even Beijing but China as a whole has to deal with a huge project. As named above, the Olympic Games are meant to be a tremendous construction work. This does not only affect the preparation of venues but even more ecological and political concerns. Primarily, human rights have to undergo a proceeding improvement during the next year and following decades. Hopefully, the Chinese Authorities are capable to handle this challenge. 468 words ...read more.