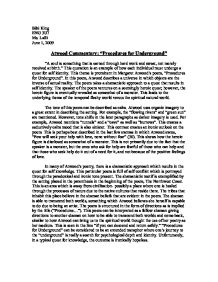 Bibi King ENG 3U7 Ms. Lalli June 1, 2009 Atwood Commentary: "Procedures for Underground" "A soul is something that is earned through hard work and sweat, not merely received at birth." This quotation is an example of how each individual must undergo a quest for self identity. This theme is prominent in Margaret Atwood's poem, "Procedures for Underground". In this poem, Atwood describes a universe in which objects are the inverse of actual reality. The poem takes a shamanistic approach to a quest that results in self identity. The speaker of the poem ventures on a seemingly heroic quest; however, the heroic figure is eventually revealed as somewhat of a monster. This leads to the underlying theme of the temporal fleshy world versus the spiritual natural world. ...read more.

help and that those who seek help do it out of a need for it, and not because of the positive feelings of love. In many of Atwood's poetry, there is a shamanistic approach which results in the quest for self knowledge. This particular poem is full of self conflict which is portrayed through the paradoxical and ironic tone present. The shamanistic motif is exemplified by the setting placed in the parenthesis in the beginning of the poem, The Northwest Coast. This is an area which is away from civilization- possibly a place where one is healed through the processes of nature due to the native cultures that reside there. The tribes that inhabit this place believe in the shaman beliefs that are evident in the poem. ...read more.

Unfortunately, in a typical quest for knowledge, the outcome is ironically hopeless. Margaret Atwood's presentation of the underground in her poem reflects the human psyche, allowing the development of one's mind, also known as a metamorphosis. This is most obviously demonstrated with the portrayal of imagery as the speaker attempts to search for knowledge describing this desire as "always hungry" The entire poem can be regarded in an extended metaphor reflecting the speaker's journey to the underground in search of her self identity. Atwood's description of the underground as a landscape is an inversion of reality, as she reverses the perceptual anticipation with the sun perceived as green and the backwards flowing of the river (Atwood, 2-3). The poem alone is symbolic of the mythical unconscious, with several Greek allusions including the legend of Persephone and the Lethe River. For instance, the speaker notes, "never to eat their food. ...read more.