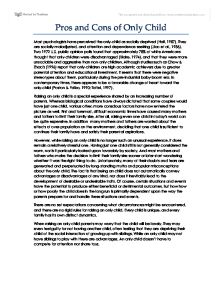 Pros and Cons of having only child

Most psychologists have perceived the only-child as socially deprived (Hall, 1987). They are socially maladjusted, and attention and dependence seeking (Jiao et al., 1986). Two 1972 U.S. public opinion polls found that approximately 78% of white Americans thought that only-children were disadvantaged (Blake, 1974), and that they were more unsociable and aggressive than non-only children. Although studies such as Chow & Zhao's (1996) report that only-children are high academic achievers due to greater parental attention and educational investment, it seems that there were negative stereotypes about them, particularly during the pre-industrial baby-boom era. In contemporary times, there appears to be a favorable change of heart toward the only-child (Poston & Falbo, 1990; Taffel, 1997). Raising an only child is a special experience shared by an increasing number of parents. Whereas biological conditions have always dictated that some couples would have just one child, various other, more conscious factors have now entered the picture as well. First and foremost, difficult economic times have caused many mothers and fathers to limit their family size. After all, raising even one child in today's world can be quite expensive. In addition many mothers and fathers are worried about the effects of over-population on the environment, deciding that one child is sufficient to continue their family have and satisfy their parental aspirations. ...read more.

Since they normally have their belongings all to themselves some only children may have some difficulty with sharing and may not like others touching items that belong exclusively to them. But once again, each child is different. It is a common misconception that only children are selfish and do not like to share. This may be true for some only children but the same can be said for other children as well. Often, two siblings of the same parents are described as being as different as night and day. Some only children may be even more willing to share their toys or other belongings because they welcome the opportunity to do so. Since they don't normally have other children to share with they may be more willing to share when the opportunity arises. An Only child at times is also very possessive and avoids interaction with other children. Parents may appreciate the advantages of raising an only child such as an absence of sibling rivalry, no fighting, arguing or teasing. Here again a problem appears, the parents forget their values and always go along the side of the only child (sometimes blindly) they sort of start to defend their child for whatever he might do good or bad. ...read more.

Of course this is only speculation but it does seem reasonable that children who do not have other children to occupy them may turn to the creativity of their own minds to occupy themselves. Many people view an only child as being spoiled but that's not necessarily true. An only child may have an extremely close bond with one or both parents however that is not unusual considering the close relationship that develops between an only child and his/her parents. As an only child, I never really missed having siblings so I honestly don't feel as though I lacked anything in my childhood. I will admit there have been times in my life when it would have been nice to have a sibling to lean on during difficult times. But even if you do have siblings there are times in life when you have to rely upon yourself and find your own inner strength. An only child is no more special than a child raised in a large family nor is he or she deprived in any way. Each family is special in its own unique way and so is each child. So it is according to each one's perspective of taking things, if we consider it an advantage well everything goes well. So we must always look towards the positive side. ?? ?? ?? ?? Pros and Cons of Only Child ...read more.