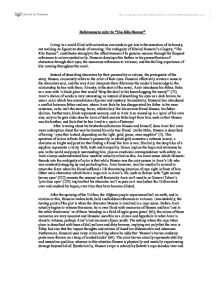 References to color in The Kite Runner

References to color in "The Kite Runner" Living in a world filled with coloration one tends to get lost in the sensation of its beauty, not noticing its figurative shade of meaning. The ambiguity of Khaled Hosseini's allegory, "The Kite Runner", contributes strongly to the effectiveness of its genuine essence through the frequent references to colors symbolically. Hosseini develops this further in his personification of characters through their eyes, the numerous references to violence, and the thrilling experience of kite running throughout the novel. Instead of describing characters by their personality or actions, the protagonist of the story, Hassan, recurrently refers to the color of their eyes. Hosseini effectively creates a sense to the characters soul, and the way Amir interprets them fabricates the reader's knowledge to the relationship he has with them. Already, at the start of the novel, Amir introduces his father, Baba as a man with 'a black glare that would "drop the devil to his knees begging for mercy"' (11). Amir's choice of words is very interesting, as instead of describing his eyes as a dark brown, he uses a color which has connotations of power and mystery. Immediately, Hosseini has introduced a conflict between father and son, where Amir feels he has disappointed his father in his mere existence, as he isn't the strong, brave, athletic boy like his servant friend Hassan, his father idolizes. ...read more.

Unmistakably, the turning point of the plot is when the character Hassan is involved in a rape scene. Before Amir actually begins to witness this scene, he is over flood with memories of Hassan and him 'lost in the white fresh snow' or of them 'standing in a field of apple green grass' (65); the colors of these memories are very innocent and Hosseini uses this as a climax and hyperbole to what Amir is about to witness; perhaps Amir's last moment of pure youth. The setting where the rape takes place is described with hues of dull yellows and dirty browns, implying not only that the area is filthy, but also that the impure thoughts and actions of Assef are dishonorable and inhumane. Furthermore, Hosseini uses irony in his writing where he adds that 'Hassan's brown corduroy pants were thrown on a heap of eroded bricks' (66). The color brown actually represents stability and masculine qualities, whereas in this situation Hassan is physically and mentally experiencing damage beyond belief. Symbolically, Hassan's rape is echoed by Sohrab's rape decades later and by Afghanistan's continual rape of war and terrorism. Furthermore, after Amir returns to his homeland to claim Sohrab, Hosseini emphasizes the color red in his surroundings. ...read more.

Winning the tournament was his chance of proving himself better than others, finally having some faith in himself. His devotion to winning the kite tournament becomes so extreme that after he witnessed Hassan getting raped, he couldn't help but look if the blue kite had any tears in it (68). Hosseini has mastered the ambiguity of language in "The Kite Runner", and expresses the arcane beauty of it through the symbolic representation in color. After noticing the numerous areas he uses color and having the ability to appreciate these techniques, it leads the reader into wanting to take further attention into noticing these small devices the author sneaks in, as all the meanings become even richer and more engrossing then before. The double meaning of color also leads the reader to ponder upon their own personal life and observe the different tones of color they see everyday. Certain colors produce endorphins which then affects the way humans respond and react to certain situations which science can thoroughly explain. If certain colors were reversed and Baba's eyes were a light vibrant blue for example, our perception of Baba would change immediately, as we no longer would associate his character as powerful and mysterious. On the whole, color influences the way one perceives objects and situations to such an extreme extent that one subconsciously is already making conclusions and decisions about how this affects personal view points. ...read more.