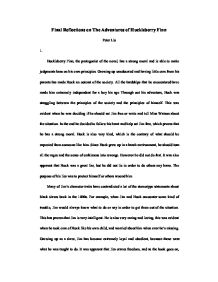 Reflections on The Adventures of Huckleberry Finn

Final Reflections on The Adventures of Huckleberry Finn Peter Liu 1. Huckleberry Finn, the protagonist of the novel, has a strong moral and is able to make judgments base on his own principles. Growing up uneducated and having little care from his parents has made Huck an outcast of the society. All the hardships that he encountered have made him extremely independent for a boy his age. Through out his adventure, Huck was struggling between the principles of the society and the principles of himself. This was evident when he was deciding if he should set Jim free or write and tell Miss Watson about the situation. In the end he decided to follow his heart and help set Jim free, which proves that he has a strong moral. Huck is also very kind, which is the contrary of what should be expected from someone like him. Since Huck grew up in a harsh environment, he should turn all the rages and the sense of unfairness into revenge. However he did not do that. It was also apparent that Huck was a great liar, but he did not lie in order to do others any harm. ...read more.

Freedom was definitely one of the most important themes throughout the novel. From the beginning of the book, the Widow tried to civilize Huck, and later on, Huck's pa gained control of him. It was apparent that Huck did not like the restrictions from them, and wanted to be free. The reason why that Huck decided to free Jim is because he felt that freedom is a common value amongst them. The Mississippi River is the ultimate symbol for freedom in the book. The river's current is always changing and moving freely without any restrictions, which is what both Jim and Huck wanted. The river has guided and led the two to their ultimate goal, freedom. Mockery of society was also one of the major themes in the novel. The author was able to reflect the worst elements of the real world in the book, and present them to the society so people can recognize their false. For example, the feud between the Grangerfords and the Shepherdsons presented the pointless things that people hate each other for. The two families do not even remember why they were fighting, and felt that killing the members of the other family was their duty. ...read more.

Also the descriptions and details in the book were able to make the scenes come alive, and they were able to allow the readers to see exactly what was going on. Books with a great amount of actions usually have very little character development. However, in this book, the author was able to develop the characters through the actions, and the major characters were all fully developed by the end of the story. The novel overall is very humorous, which is another reason why that people enjoy the book. The intelligence and the ability of the book to make the readers think and reflect is also one of its major strengths. Although the book is one of the first great American novels, it still contains a few weaknesses. One of its weaknesses is that the language used in the dialogues is difficult for non-Southern Americans to understand, especially dialogues involving Jim. The era and the location at which it is written have affected the language used, and thus creating a barrier between the text and the readers. The plot of the book was fairly complicated, and sometimes understanding the situation in the novel can be very difficult. Since there are many names and minor characters in the book, keeping track of them can be a challenge. ...read more.