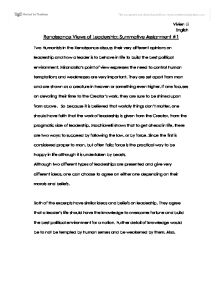 Renaissance Views of Leadership: Summative Assignment #1 Two Humanists in the Renaissance discuss their very different opinions on leadership and how a leader is to behave in life to build the best political environment. Mirandolla's point of view expresses the need to control human temptations and weaknesses are very important. They are set apart from man and are shown as a creature in heaven or something even higher. If one focuses on devoting their time to the Creator's work, they are sure to be shined upon from above. So because it is believed that worldly things don't matter, one should have faith that the work of leadership is given from the Creator. From the pragmatic side of leadership, Machiavelli shows that to get ahead in life, there are two ways: to succeed by following the law, or by force. ...read more.

Further detail of knowledge would be to not be tempted by human senses and be weakened by them. Also, characteristics are to be as smart as a fox and a lion; defend against traps and terrify others as a sign of power. As there as similarities between them, there are differences. Mirandolla believes that it is unnecessary to give in to temptations, for it is not what a man would do. Self control and knowledge is the key to pursuit active life. Machiavelli disagrees by stating that to achieve what is desired, one must use force and gain advantages, disguise and pretend into appropriate characteristics. Divine point of view believes through faith that the afterlife is more important and one should lead without temptations. ...read more.

Because many people believe that the afterlife is more important and will be rewarding since one had been wise on Earth. Machiavelli was known as "The Devil". His point of view includes that faith is not needed, and that one should have beastly characteristics, specifically a fox and a lion. Therefore, a leader cannot keep faith because living in a world full of men with craft can only be won by human instincts. This is a great advantage on Earth because one can choose to obtain whatever they want by following their senses. In conclusion, both excerpts contain very different ideas and can be looked as either good or bad according to oneself. Since it is their own opinion, it cannot be considered inaccurate because it is according to what one's faith and what they believe in. ?? ?? ?? ?? Vivien Li English ...read more.