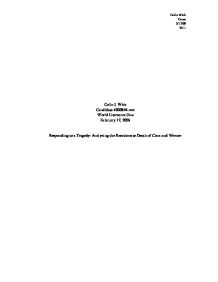 Responding to a Tragedy: Analyzing the Reactions to Death of Clara and Werner

Colin J. Wick Candidate #000844-xxx World Literature One February 17, 2009 Responding to a Tragedy: Analyzing the Reactions to Death of Clara and Werner When confronted with death, individuals tend to show their core personalities and intrinsic values. In the novels The House of the Spirits, by Isabel Allende, and Mikhail Lermontov's A Hero of Our Time, the authors create characters that show striking similarities in their initial reactions to the deaths of other characters. Both characters, Clara and Werner, immediately distance themselves from a death, in which they consider themselves partially responsible. However, the two characters ultimately react differently to the deaths they experience. Clara eventually reconnects, and in fact, further develops a relationship with what she originally distanced herself from: the physical world; while Werner, contrastingly, further distances himself from Pechorin, because in the end, his principles continue to conquer his emotions. In both novels, Clara and Werner demonstrate similar responses to events leading up to and during the death of another character, as they both slowly begin to feel disconcerted and shelter themselves from the death itself. Clara showed these characteristics during the funeral of her sister Rosa, when instead of paying her respects to her sister "with a kiss on her cold forehead" as the rest of her ...read more.

For example, after witnessing the vivid, and in many ways, disturbing autopsy of her sister, where a young man whom Clara "had never seen before kissed Rosa on the lips, the neck, the breasts, and between the legs", Clara felt the "silence of the entire world" weigh down upon her causing her to embrace that silence for nine years (Allende 39). During her prolonged period of silence, Clara invented a world all her own, protecting her from "life's inclement weather", where reality no longer existed just as "the laws of physics and logic did not always apply" (Allende 82). Because of Rosa's death, Clara begins to see the world as a cruel and stormy place. Therefore, Clara separates herself from the harsh reality of life and invents her own world, in order to shield herself from the atrocities of the real world. Similarly, Werner separates himself socially from Pechorin. Werner begins to use only formalities in his contacts with Pechorin, and instead of speaking with him directly to tell him that their plan for concealing the murder had been carried out, he sends him a letter that closes by encouraging Pechorin to "sleep in peace...if [he] can", and closes with a very simple and dry "goodbye" (Lermontov 156). ...read more.

Despite, his strong friendship with Pechorin, he let their relationship erode away because Pechorin refused to show any remorse for his past actions. Therefore, in contrast to Clara's ability to revive a relationship with what she separated herself from after the death of her sister, Werner's moral values overcame his intense desire for a renewed friendship with Pechorin, causing him to allow their strong connection to wear away into simply an acquaintance. In conclusion, the two characters show a similar initial strength in their values. However they differ in their ability to absolve their pain and reconnect with what or whom they assigned responsibility. This ability or inability to let go of their anguish shows unique characteristics about both characters and novels. In the case of Clara, her eventual reconnection with the world shows her very passive and calm aura that continues throughout the novel and supports Allende's portrayal of women as calm yet powerful creatures. Additionally, in A Hero of Our Time, Werner's lack of ability to relinquish his anger towards Pechorin, despite his strong feelings, reveals a character that puts his moral principles before his emotions. This characteristic is not only observed in Werner but also in the other rational, male characters that Lermontov presents in the novel. ...read more.