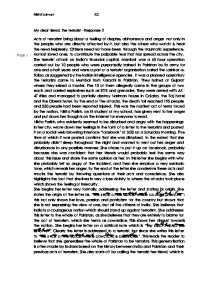 My dear friend, the terrorist- Response 2 Acts of terrorism bring about a feeling of despise, abhorrence and anger not only in the people who are directly affected by it, but also the others who watch & hear the news helplessly. Citizens need not have been through the traumatic experience, nor lost loved ones, to contribute the palpable fear that has spread across the city. The terrorist attack on India's financial capital, Mumbai was a 60 hour operation carried out by 10 people who were purportedly trained in Pakistan by its army for one and a half years and were a part of a terrorist organisation called the Lashkar-e-Toiba, as suggested by the Indian intelligence agencies. It was a planned operation; the terrorists came to Mumbai from Karachi in Pakistan. They halted at Gujarat where they seized a trawler. The 10 of them allegedly came in five groups of two each and carried explosives such as RDX and grenades. They were armed with AK-47 rifles and managed to partially destroy Nariman house in Colaba, the Taj hotel and the Oberoi hotel. By the end of the attacks, the death toll reached 195 people and 350 people had been reported injured. This was the nastiest act of terror faced by the nation. Nikita Parikh, an IB student of my school, has given vent to her anger and put down her thoughts on the internet for everyone to read. Nikita Parikh, who evidently seemed to be disturbed and angry with the happenings in her city, wrote down her feelings in the form of a letter to the terrorists and posted it on a social web browsing interface 'facebook' at 5:05 on a Saturday morning. The time at which it was posted confirms that she was disturbed, to the extent that she probably didn't sleep throughout the night and wanted to vent out her anger and disturbance in any possible manner. ...read more.

Nikita makes use of an anaphor to imply the disgust that she felt hearing the bombs, going through such a traumatic experience. She makes the reader sense such an attack through the effective use of gustatory, olfactory and visual imagery. This makes the reader sympathise with her sentiments against terror and realise that a na�ve you girl of 17 years has gone through a very disturbing experience and yet she is handling her thoughts very maturely. Nikita now starts blatantly condemning their acts. The tone employed through the paragraph is a very angry one. She starts defending Mumbai and attacking the conscience and reason that these terrorists had in mind when they started out this operation. She makes them feel dull. She also seems to have full confidence in the spirit of Mumbai, the spirit of resilience and ability to return to normalcy. Clearly, the effect of this whole incident, has etched permanent frowns on the hearts and minds of the people. Nikita has been very blunt in this paragraph, which makes it appear to the readers that she has had enough of terrorism and wanted to combat it. She also feels that there's no point to terrorism, as there is nothing to gain from it. "You spread terror to make the world a better place" and "thank you my friend for spreading the love". These are very ambiguous statements as the aftermath of these attacks were those of peace walks to spread love and show solidarity and unity, but it could also be looked at as though she is mocking them. "Can you reveal to me the secrets behind this newfound revelation?" This confirms that she is trying to mock the terrorists and their acts by questioning their thoughts and reason. The next line she expresses outright anger by insulting them. She puts this thought in one line to make it impactful, to make the reader realise the effect that this experience has had on her, to make them realise that terrorists are inhuman creatures. ...read more.

You might know it better as home" tells the readers that she is convinced that these terrorists came from there without the presence of too much evidence. I feel that her lack of respect for the Islam community and Mujahedeen's (Jihadists) is incorrect and she needs to change her opinion of Islam. This is because I believe that Jihad has been misinterpreted, it is a struggle, not a war and some people spread the misinterpreted meanings to make people of this faith rise and fight those who do not have faith in Allah. In conclusion I feel that the article is very well written but it is biased against Pakistan and Islam. I feel that terrorism hold no religion and any ideology cannot be blamed for terrorism, but I am of the view that nations can be held responsible for terrorism but we must not take radical steps against nations in the name of self-defense. The article is beautifully structured, somewhat like a poem with variations in the number of words in each line and each stanza having a different shape and implying and suggesting something different. She has put many people's thoughts on paper very beautifully. I particularly liked the way she expressed her insecure feeling and the way the words' open doors' were coined to symbolize her helplessness. The letter has appealed to our senses and is very emotionally written with a lot of personal messages which were brought out in the letter. It appealed to me because I felt It came straight out of the writer's heart and her emotions are well displayed. I also feel that she has used a lot of irony, symbolization and has varied her tone to make the letter more interesting and to create a stronger impact of her views on the readers. Overall, it was a very well written piece of work, though a little bias sometimes against Pakistan, which is understandable due to the long history between the nations ?? ?? ?? ?? Nikhil Lalvani XC ...read more.