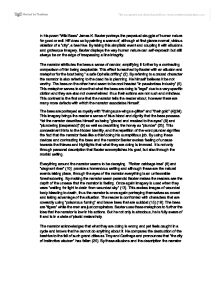 In his poem "Wild Bees" James K. Baxter portrays the perpetual struggle of human nature for good or evil. HE does so by painting a scene of, although at first glance normal, vicious violation of a "city", a bee hive. By taking this simplistic event and coupling it with allusions and grotesque imagery, Baxter displays the way human nature can self-reproach but still always be on the edge of trespassing a line integrity. The narrator attributes the bees a sense of candor, amplifying it further by a contrasting comparison of him being despicable. This effect is reached by Baxter with an allusion and metaphor for the boat being " a safe Ophelia drifting" (2). By referring to a crazed character the narrator is also referring to the deed he is planning. He himself believes it be not worthy. The bees on the other hand seem to be cool headed "in passionless industry" (5). ...read more.

It is not only through personal description that Baxter accomplishes his goal, but also through the morbid setting. Everything around the narrator seems to be decaying. "Rotten cabbage tree" (6) and "stagnant river" (10) provide a horrendous setting and although these are the natural events taking place, through the eyes of the narrator everything is an unfavorable foreshadowing. By making the narrator seem paranoid Baxter makes the readers see the depth of the unease that the narrator is feeling. Once again imagery is used when they were "waiting for light to drain from wounded sky" (13). This evokes images of wounded body bleeding to death, thus the narrator is once again portraying themselves as covert and taking advantage of the situation. The reader is confronted with characters that are cowardly using "poisonous fuming" and brave bees that are suicidal (15) (16). The bees are "tigers" while the men are just conspirators. ...read more.

Readers themselves get a glimpse of regret coming from the narrator; but it is also sweet melancholy as the narrator finally ventures on. The deed was done in "ripe January" yet the planning was always thought of "often in summer" however the narrator concludes that although he believes it to be " a cool night in summer" everything just served as "froth of winter". The muddle with seasons is purposeful for the narrator wished it to be a blossoming summer, simple honeys gather. The brutal truth of winter was that they destroyed a whole "kingdom". He concludes that this "loss" that he guilty of also brings him sweet reminder of who he is. A man with a "fallen heart that does not cease to fall " (30). James Baxtor portrays human nature in a sense that is desires to be acknowledged for what it is, and although humans realize their fatal shortcoming they still strive for the fall because that is who they are and were throughout the history, in every self-imposing action they produced. ...read more.