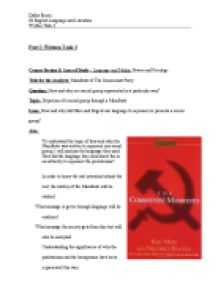 Rhetorical analysis of the Communist Manifesto

﻿Dafna Bicaci IB English Language and Literature Written Task 3 ________________ Part 1 Written Task 2 Course Section & Area of Study : Language and Media: Power and Privilege Title for the Analysis: Manifesto of The Communist Party Question: How and why is a social group represented in a particular way? Topic: Depiction of a social group through a Manifesto Issue: How and why did Marx and Engels use language to represent or promote a social group? Aim: To understand the topic of how and why the Manifesto was written to represent one social group, I will analyze the language they used. How did the language they used show the m as authority to represent the proletarians? In order to know the real intention behind the text, the history of the Manifesto will be studied. What message is given through language will be analyzed. What message the society gets from this text will also be analyzed. Understanding the significance of why the proletarians and the bourgeoisie have been represented this way. Manifesto of the Communist Party was written by Karl Marx and Friedrich Engels in December 1847. ...read more.

The repetition of the word ?everywhere? shows his dedication towards making the proletarians? life better. He uses this technique in order to brand his ideology into everyone?s mind. Marx causes attention to the word ?everywhere? because he wants to show them that communism will give them the opportunity to live wherever they want without being discriminated by the bourgeoisie. Marx used other repetition figures such as anaphora to establish a greater connection between him and the proletarians and to earn their trust. He needs the proletarians to see him as an authoritarian to achieve his goal, which is to diminish capitalism. In this excerpt, the exposition of every paragraph is ?The bourgeoisie?; this anaphora has similar affects as the epistrophe is used throughout the Manifesto. He used this technique to get their attention on something they can act on which is the bourgeoisie. The constant repetition will also evoke them that the bourgeoisie has more power than them. Making them realize will eventually make them act upon their rights resulting in Marx and Engel achieving their goal. ...read more.

The major premise that ?The history of all hitherto existing society is the history of class struggles? sets up the contention that capitalism takes advantage of the working class. Marx and Engels then give examples: ?Freeman and slave, patrician and plebian, lord and serf, guild-master and journeyman, in a word, oppressor and oppressed??. The implied conclusion is that the rich and powerful bourgeoisie oppress the poor and weak proletariat. Marx and Engel were evoking the emotion of solidarity to solve the problem of class discrimination. Marx?s idea was to arise the proletarians all together in order to create an ?uninterrupted disturbance of all social conditions?. In order to do this he needed to win the Proletarians? confidence and therefore he used efficient language that would make them think that he is an expertise in solving this problem. His language was meant to unify the proletarians to take an action for their rights. His appeal to solidarity made the proletarians think that unity could make a change. By using reason to give an effective argument (usage of logos) and by adding linguistic techniques (usage of anaphora, epistrophe and rhetorical questions), Marx and Engels employed the art of rhetoric in a manner that affects the reader greatly. ...read more.