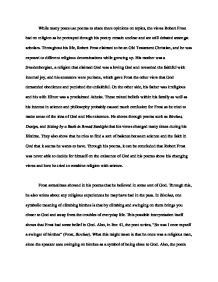 Robert Frost as a Thinker: Religion

While many poets use poems to share there opinions on topics, the views Robert Frost had on religion as he portrayed through his poetry remain unclear and are still debated amongst scholars. Throughout his life, Robert Frost claimed to be an Old Testament Christian, and he was exposed to different religious denominations while growing up. His mother was a Swedenborgian, a religion that claimed God was a loving God and rewarded the faithful with internal joy, and his ancestors were puritans, which gave Frost the other view that God demanded obedience and punished the unfaithful. On the other side, his father was irreligious and his wife Elinor was a proclaimed Atheist. These mixed beliefs within his family as well as his interest in science and philosophy probably caused much confusion for Frost as he tried to make sense of the idea of God and His existence. He shows through poems such as Birches, Design, and Sitting by a Bush in Broad Sunlight that his views changed many times during his lifetime. They also show that he tries to find a sort of balance between science and the faith in God that it seems he wants to have. ...read more.

At other times, Frost's poems seem to indicate that he didn't fully believe or couldn't give himself enough proof about the existence of God. One example of this is in Birches, such as in lines 3 to 5: "I like to think some boy's been swinging them. But swinging doesn't bend them down to stay As ice storms do. Often you must have seen them" (Frost, Birches) While Frost wishes that the birches in the poem were bent from a boy climbing and swinging them, he knows in fact that they are from nature. What this might imply is that at times Frost's logic overcame his belief in God, and this didn't allow him to believe fully in God. Another point one of his poems makes is that in the end of Design he can't decide if it was through divine intervention or coincidental chaos that brought the spider and moth together on top of the heal-all. "What but design of darkness to appall? If design govern in a thing so small." (13-14, Frost, Design) This is one of many places in Frost's poems where he shows uncertainty on the topic of God. ...read more.

But, because of God the sun's power helps us live. Robert Frost also tries to make an argument in the fourth stanza of why proof of God's existence nowadays may not be very easy to find, and his reason is that he declared himself last at the event of the Burning Bush, and that that alone should be enough to keep our faith alive. Robert Frost grew up in the influence of many different religious beliefs, and because of this and his own scientific interests his religious views became very hard to clearly define. His different poems provide evidence for and against the existence of God, and show that during Frost's lifetime he had changing viewpoints on God. The poems also show that Frost tried to find a way to combine science and religion in a way where they wouldn't conflict with each other. While it is believed that Frost died believing in God because of a letter he wrote a few days before he died claiming his belief in God, it is safe to say that throughout his lifetime Frost wasn't able to come to a solid conclusion if a God truly existed or not. ...read more.