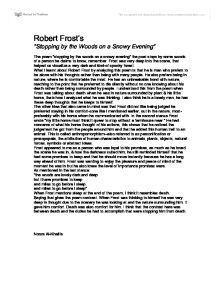 Robert Frost &quot;stopping by the woods on a snowy evening&quot;

The other idea that also came in mind was that Frost did not like being judged he preferred staying in his comfort-zone like i mentioned earlier, out in the nature, most-preferably with his horse whom he communicated with. In the second stanza Frost wrote "my little horse must think it queer to stop without a farmhouse near." He had concerns of what his horse thought of his actions, this shows that he noticed the judgement he got from the people around him and that he added this human trait to an animal. This is called anthropomorphism--also referred to as personification or prosopopeia, the attribution of human characteristics to animals, plants, objects, natural forces, symbols or abstract ideas. ...read more.

As mentioned in the last stanza: "the woods are lovely dark and deep but i have promises to keep and miles to go before i sleep and miles to go before i sleep" When Frost mentions sleep at the end of the poem, i think it resembles death. Saying that gives the poem contrast. When Frost was thinking to himself he was very deep in thought due to the scenery he was looking at and the nature surrounding him. It gave him comfort. Death was also comfort for him. I think that the contrast here was between death and the duties he had to accomplish that were stopping him from death. Noora Al-Khalifa ...read more.