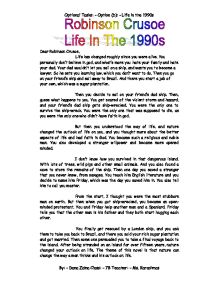 Dear Robinson Crusoe, Life has changed roughly since you were alive. You personally don't believe in god, and what's more you hate your family and hate your dad. Your dad wouldn't let you sail on a ship, and wants you to become a lawyer. So he sets you learning law, which you don't want to do. Then you go on your friend's ship and sail away to Brazil. And there you start a job of your own, which was a sugar plantation. Then you decide to sail on your friend's dad ship. Then, guess what happens to you. ...read more.

But then you understood the way of life, and nature changed the outlook of life on you, and you thought more about the better aspects of life and had faith in God. You became such a religious and noble man. You also developed a stronger willpower and became more opened minded. I don't know how you survived in that dangerous island. With lots of trees, wild pigs and other small animals. And you also found a cave to store the remains of the ship. ...read more.

Friday tells you that the other man is his father and they both start hugging each other. You finally get rescued by a London ship, and you ask them to take you back to Brazil, and there you sold your rich sugar plantation and got married. Then some one persuaded you to take a final voyage back to the island. After being stranded on an island for over fifteen years, nature changed your outlook on life. The theme of this novel is that nature can change the way a man thinks and his outlook on life. Optional Tasks: - Option (b): - Life in the 1990s By: - Dana Zaina Class: - 7B Teacher: - Ms. Karadimas ...read more.