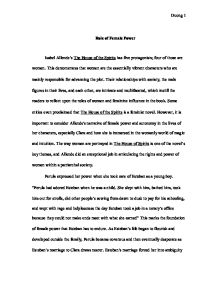 Role of Female Power Isabel Allende's The House of the Spirits has five protagonists; four of those are women. This demonstrates that women are the essentially vibrant characters who are mainly responsible for advancing the plot. Their relationships with society, the male figures in their lives, and each other, are intricate and multifaceted, which instill the readers to reflect upon the roles of women and feminine influence in the book. Some critics even proclaimed that The House of the Spirits is a feminist novel. However, it is important to consider Allende's narrative of female power and autonomy in the lives of her characters, especially Clara and how she is immersed in the womanly world of magic and intuition. The way women are portrayed in The House of Spirits is one of the novel's key themes, and Allende did an exceptional job in articulating the rights and power of women within a patriarchal society. ...read more.

On the other hand, Clara acquired power through her own magical world of the supernatural intuition and Esteban's deep obsession with her. Even though Esteban rage power in political and economic means, Clara was too absorbed by the spiritual realm to be disturbed by Esteban's vigor. However, Esteban's attitude towards Clara's practices is completely opposite; he is constantly exasperated with Clara's nonchalance. This infuriation was evident especially after the building of their lavish European-style home, which is a complete portrait of Esteban's inner characteristics and beliefs: "Clara never went to see the house during the time it was being built. She was as uninterested in it as she was in her trousseau, and she left all decisions in the hands of her fianc� and her future sister-in-law". Clara was able to reduced Esteban's confidence by ignoring the physical pleasures he provides, and this attitude keep Esteban working to try and please her. ...read more.

Her statement about women: "... women are really thick. They are the daughters of rigidity. They need a man to feel secure but they don't realize the one thing they should be afraid of is men. They don't know how to run their lives. They have to sacrifice themselves for the sake of someone else" appropriately concluded Allende's analysis of feminine authority. It can be said that Clara and the rest of The House of the Spirits women are of existence because they were able to confront the male perspective and way of life. They are the complications that provide the challenges the patriarch must face and conquer, such as Ferula and Clara, who constantly keep Esteban running. From his childhood into his successful years as a political powerhouse, these women expressed their power to defy and manipulate Esteban as best they can, Ferula through her power of motherly love and Clara using her command of the spirits. Duong 1 ...read more.