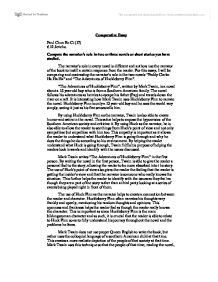 This openness and frankness helps the reader feel as though the reader really knows the character. This is important as since Huckleberry Finn is the main bildungsroman character and as such, it is crucial that the reader is able to relate to Huck Finn so as to fully understand his journey throughout the novel and the problems he faces. Mark Twain does not use proper Queen English to write the book, but rather uses the colloquial language of a southern American child at that time. This creates a more realistic depiction of the people of that society at that time. Mark Twain uses this technique so that the people of that time, reading the novel, would feel as if the characters were just people in their society, making the novel feel almost non-fiction. The use of such language adds to the social realistic nature of the book and makes it easier for the readers to relate too and also have a better connection to the characters in the book. ...read more.

This can be seen by all the past memories blended into Paddy's present experiences, which he uses to help the reader understand his current situation better. All of Paddy's thoughts are all internalized and not voiced out, except for the time he talks about his insecurities to Kevin. This creates an exclusive feel for the reader to be able to see into his thoughts and understand it more completely. The use of Paddy as the narrator also allows us to follow his trail of thoughts throughout the novel and see how he grows in maturity as the story progresses. Being able to see this first-handedly, Doyle is able to show the bildungsroman aspect of the novel and show how Paddy grows up gradually and starts to speak out opinions of his own. The roles of the narrator in these two novels are similar as their styles are very similar. Both authors use the style of narration and the point of view of narration to fulfill their purpose in writing the novel, allowing the readers to not only enjoy the novels, but also understand that the authors are trying to convey to them. ...read more.