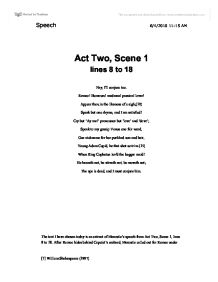 Act Two, Scene 1 lines 8 to 18 Nay, I'll conjure too. Romeo! Humours! madman! passion! lover! Appear thou in the likeness of a sigh;(10) Speak but one rhyme, and I am satisfied! Cry but 'Ay me!' pronounce but 'love' and 'dove'; Speak to my gossip Venus one fair word, One nickname for her purblind son and heir, Young Adam Cupid, he that shot so trim (15) When King Cophetua lov'd the beggar maid! He heareth not, he stirreth not, be moveth not; The ape is dead, and I must conjure him. The text I have chosen today is an extract of Mercutio's speech from Act Two, Scene 1, lines 8 to 18. After Romeo hides behind Capulet's orchard, Mercutio called out for Romeo under Benvolio's request. While he has no knowledge of Romeo's newfound love for Juliet, Mercutio mocks Romeo's unrealistic idealism of love. Through this speech, Shakespeare has displayed Mercutio as a humorous, lively but logical young man whose personality is completely opposite to Romeo's. ...read more.

Instantly, we can see that Mercutio is displayed as a unpredictable character who doesn't believe in true love. In the following text, Mercutio continues his mockery: "Speak but one rhyme, and I am satisfied; Cry but "Ah me!" Pronounce but "love" and "dove;" (II.i.11-12) This time, Mercutio took on the role of Rosaline; He calls out to Romeo sarcastically as his lover, asking him to respond with a love poem. Through this, Shakespeare has shown us Mercutio's humorous and playful personality as well as his close bond with Romeo. Then again, Mercutio's skeptical view of love is revealed again, the evidence is also clearly displayed in the following lines: "One nickname for her purblind son and heir, Young Abraham Cupid, he that shot so trim, When King Cophetua lov'd the beggar-maid!" (II.i.14-16) "When King Cophetua loved the beggar maid" refers to a ballad in which a fictional African monarch named Cophetua despised all women until he met and fell passionately in love with a beggar maid, whom he married despite their social difference3. ...read more.

(II.i.17-18) "The ape is dead" and is a metaphor for Romeo: During the Elizabethan era, apes were trained for fairs; they play dead until their masters "revive" them with a "magic" word. Mercutio is saying that Romeo is like a ghost or spirit, always moaning and sighing over Rosaline, and he needs to break away from her "spells". Although this whole speech of Mercutio is full of mockery, we can still see wise advises hidden within. From this, we can recognize Mercutio's deep bond with Romeo and his sincere concerns for him. Shakespeare has expressed an interesting, different view of love through the character Mercutio. Through this lighthearted speech, Mercutio not only showed his humorous side, he has also shown a very deep level thinking as well as his great values; with this, he has proven himself as a trustworthy friend. I personally think Shakespeare created Mercutio with a close resemblance with himself; they both share a humorous, intelligent and wise personality. The fluent language of this verse, the humorous metaphors, and the flowing structure make this a heartwarming scene with a brave display of the complex human nature. ...read more.