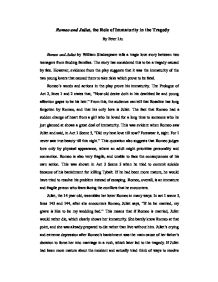 Romeo and Juliet, the Role of Immaturity in the Tragedy

Romeo and Juliet, the Role of Immaturity in the Tragedy By Peter Liu Romeo and Juliet by William Shakespeare tells a tragic love story between two teenagers from feuding families. The story has considered this to be a tragedy caused by fate. However, evidence from the play suggests that it was the immaturity of the two young lovers that caused them to take risks which prove to be fatal. Romeo's words and actions in the play prove his immaturity. The Prologue of Act 2, lines 1 and 2 states that, "Now old desire doth in his deathbed lie and young affection gapes to be his heir." From this, the audience can tell that Rosaline has long forgotten by Romeo, and that his only love is Juliet. ...read more.

Romeo, overall, is an immature and fragile person who fears facing the conflicts that he encounters. Juliet, the 14 year old, resembles her lover Romeo in many ways. In act 1 scene 5, lines 143 and 144, after she encounters Romeo, Juliet says, "If he be married, my grave is like to be my wedding bed." This means that if Romeo is married, Juliet would rather die, which clearly shows her immaturity. She barely knew Romeo at that point, and she was already prepared to die rather than live without him. Juliet's crying and extreme depression after Romeo's banishment was the main cause of her father's decision to force her into marriage in a rush, which later led to the tragedy. ...read more.

Instead, they could have given their relationship more time and gotten to know each other better. The lovers were unable to find the necessary courage, intelligence and experience within to solve their problems. This, too, is an obvious sign of their immaturity. It seems that Romeo and Juliet believe the only way to resolve their conflicts and to mend their mistakes is by death. Numerous suicide attempts were made by the lovers throughout the story; their immature and fragile hearts were unable to accept the sudden and complex conflicts encountered in such a short time. Shakespeare's Romeo and Juliet has sent the message that lack of maturity can sometimes lead to death. Evidence from the play shows that it was, in fact, Romeo and Juliet's immaturity that led to their downfall. The author suggested that one has to be fully prepared and mature enough before becoming involved in a relationship, if not, the risks could be fatal. ...read more.