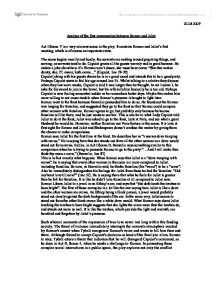 Analyse of the first conversation between Romeo and Juliet Act I Scene V is a very relevant scene in the play. It contains Romeo and Juliet's first meeting, which is of course an important event. The scene begins merrily and busily, the servants are rushing around preparing things, and serving, as servants tend to do. Capulet greets all the guests warmly and in good humour. He makes a joke about how if a Woman won't dance, she must have corns: "She that makes dainty, she, I'll swear, hath corns..." (Capulet, line 19-20) Capulet joking with his guests shows he is in a good mood and intends this to be a good party. Perhaps Capulet starts to feel his age around line 35. Whilst talking to a relative they discuss when they last wore masks, Capulet is told it was longer than he thought. In act I scene I, he asks for his sword to join in the brawl, but his wife tells him basically he is too old. Perhaps Capulet is now feeling somewhat sadder as he remembers better days. Maybe this makes him more willing to not cause trouble when Romeo's presence is bought to light later. ...read more.

The first of those examples is a lot like the one saying how Juliet is like a dove and the other women are crows. An Ethiop being a black person, a jewel would probably stand out clearly against the dark background of the ear. In the same way, Juliet seems to stand out from the other black crows like a white dove would. What Romeo says about Juliet teaching the torches to burn bright suggests that she lights the room more than the torches do, and stands out more as well. It is like the torches, which provide the light and warmth, are humbled and forgotten by Juliet's presence. Such ethereal moments of the expression of true love never last long within this feuding society. The threat of violence immediately interrupts the romantic atmosphere created by Romeo's sonnet when Tybalt recognizes Romeo's voice and wants to kill him then and there. Although forced to accept Capulet's decision as head of the family to allow Romeo to stay, Tybalt utters a threat that indicates that he will disregard Capulet's command, as he does in Act II, Scene 4, when he sends a challenge to Romeo. In presenting these complex social interactions in a public space, the play explores not only the conflict between the two feuding families but also the conflict within the families and across the generations. ...read more.

(Romeo, Act I Scene V, line 118) This means that he now owes his very life to Juliet, who (as a Capulet) is his foe. Juliet still doesn't know who Romeo is. She asks the nurse to find out who he is. But she asks about two other men first, so as not to make it obvious she is just interested in Romeo. When the nurse tells her he is a Montague, she is equally shocked: "My only love sprung from my only hate!" (Juliet, Act I Scene V, line 18) There is a sense of despair and disappointment for both of them I think. However, neither of them give up and try to move on. Also, the fact that neither of them knew each other's name before they said what they did, and kissed, highlights the haste and suddenness of their love. This scene is most importantly about Romeo and Juliet's romance, but the way in which Shakespeare juxtaposes this with Tybalt's aggression shows that it not only begins their love but also their downfall and death. Romeo and Juliet seek unity between themselves and thus also their houses, but Tybalt wishes to divide them. This mix between love and hate is what the whole play is all about. ?? ?? ?? ?? 20.04.2009 ...read more.