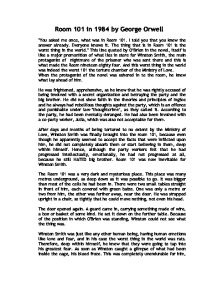 Room 101 in 1984 by George Orwell "You asked me once, what was in Room 101. I told you that you knew the answer already. Everyone knows it. The thing that is in Room 101 is the worst thing in the world." This line quoted by O'Brien in the novel, itself is like a major premonition of what lies in store for Winston Smith, the main protagonist of nightmare of the prisoner who was sent there and this is what made the Room nineteen eighty four. And this worst thing in the world was indeed the worst 101 the torture chamber of the Ministry of Love. When the protagonist of the novel was ushered in to the room, he knew what lay ahead of him. He was frightened, apprehensive, as he knew that he was rightly accused of being involved with a secret organization and betraying the party and the big brother. ...read more.

It was bigger than most of the cells he had been in. There were two small tables straight in front of him, each covered with green baize. One was only a metre or two from him, the other was further away, near the door. He was strapped upright in a chair, so tightly that he could move nothing, not even his head. The door opened again. A guard came in, carrying something made of wire, a box or basket of some kind. He set it down on the further table. Because of the position in which O'Brien was standing, Winston could not see what the thing was. Winston Smith was just like any other human being, having human emotions like love and fear, and in his case the worst thing in the world was rats. Therefore, deep within himself, he knew that they were going to tap into his greatest fear. ...read more.

However, contradictory to this, in the end, he could hold on to his true feelings and beliefs about the party and even though he in front of them he admitted that he believed that two plus two made five and freedom is slavery, within himself, he knew that two plus two made four and never five. He was still against the party; he still wanted the party to be defeated. After all, tomorrow is another day and another beginning. He had emerged victorious and won the battle against them, because at heart, he never gave into their beliefs and theories. He kept hoping against hope that it could still happen. But it never did, and in the end when he was destroyed, all the values he had embodied, like democracy, peace, freedom, love, and decency had been destroyed too. Hence, Winston ultimately lost his spirit and humanity, two characteristics he fought hard to keep and this is what led to his defeat. Totalitarianism had won over humanity. ...read more.