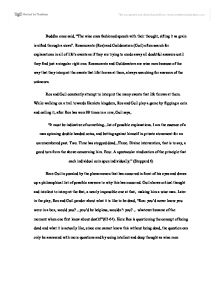 Buddha once said, "The wise ones fashioned speech with their thought, sifting it as grain is sifted through a sieve". Rosencrantz (Ros) and Guildenstern (Guil) often search for explanations in all of life's events as if they are trying to erode away all doubtful answers until they find just a singular right one. Rosencrantz and Guildenstern are wise men because of the way that they interpret the events that life throws at them, always searching for answers of the unknown. Ros and Guil constantly attempt to interpret the many events that life throws at them. While walking on a trail towards Hamlets kingdom, Ros and Guil play a game by flipping a coin and calling it, after Ros has won 89 times in a row, Guil says, "It must be indicative of something...list of possible explanations. ...read more.

Here Guil is puzzled by the phenomenon that has occurred in front of his eyes and draws up a philosophical list of possible answers to why this has occurred. Guil shows critical thought and intellect to interpret the feat, a nearly impossible one at that, making him a wise man. Later in the play, Ros and Guil ponder about what it is like to be dead, "Ros: you'd never know you were in a box, would you? ...you'd be helpless, wouldn't you? ... whatever became of the moment when one first knew about death?"(62-64). Here Ros is questioning the concept of being dead and what it is actually like, since one cannot know this without being dead, the question can only be answered with more questions and by using intellect and deep thought as wise men would normally use in solving their problems. ...read more.

Here both characters are representing both sides of the argument, Guil asks why should they change the letters up because they do not know what death is like however Ros believes that since Hamlet is their friend, they should save him. Both use logical reasoning to support their arguments as Guil states that they do not know why this is to happen and Ros explains about their childhood. This argument showcases how they are wise as they use previous knowledge, coupled with individual intellect to deduce their arguments. Rosencrantz and Guildenstern are both wise men by questioning life's events. Rosencrantz and Guildenstern are both wise because they question the world. They do not just accept life's problems but they try to understand why these are problems making them wise. Ros and Guil question to show wisdom. ...read more.