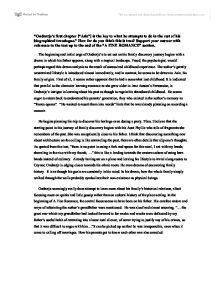 "Ondaatje's first chapter ["Asia"] is the key to what he attempts to do in the rest of his biographical travelogue." How far do you think this is true? Support your answer with reference to the text up to the end of the "A FINE ROMANCE" section. The beginning and initial urge of Ondaatje's to set out on his family discovery journey begins with a dream in which his father appears, along with a tropical landscape. Freud, the psychologist, would perhaps regard this dream analysis as the result of unresolved childhood experience. The author's greatly westernized lifestyle is introduced almost immediately, and in contrast, he seems to be drawn to Asia, his family origins. First of all, it seems rather apparent that he had a somewhat lost childhood. It is indicated that parallel to the character learning romance as she grew older in Jane Austen's Persuasion, is Ondaatje's intrigue in learning about his past as though to regain his abandoned childhood. He seems eager to return back to understand his parents' generation, they who existed in the author's memory as "frozen operas". ...read more.

In the beginning of A Fine Romance, the central focus seems to have been on his father. His carefree nature and ways of infuriating the author's grandfather were mentioned. He was aloof and almost uncaring, "... the great row which my grandfather had looked forward to for weeks and weeks were deflected by my father's useful habit of retreating into almost total silence, of never trying to justify any of his crimes, so that it was difficult to argue with him..."It can be picked up on that he was irresponsible, even when it came to calling off marriages. How his parents got to know each other was also unveiled. The role of "Cambridge" in Ondaatje's father's generation was mentioned to have been particularly useful despite the fact that none of them had actually really attended the school. He knew enough of the people there to have pulled off His grandparents' lavish lifestyle in the twentieth century was also brought up. Supposedly, most of the year was spent in Colombo, while the hot months of April and May were spent in Nuwara Eliya. ...read more.

Gossip and scandal seem to have distorted the truth quite bit, having created an exaggerated fabrication of the actual facts and occurrences. Towards the end of "A Fine Romance", Ondaatje's grandfather and father are once again mentioned. Philip Ondaatje, the grandfather was apparently very strict. In oppose to that, Ondaatje's father was an alcoholic who did not work at all hard, especially in comparison. As seen in the text, "Whatever "empire" my grandfather had fought for had to all purposes disappeared". Traveling to his father's old house in which he used to hide and store alcohol shows his interest in further knowing what kind of a person his father was. Family ties and random things that ran in the family were also brought into perspective. There were the drunks, such as his father and great-grandfather Aelian. In addition to most liking liquor, most blamed diabetes for their hot-temper as well. "... And most were attracted to a family called Prins and had to be talked out of marriage - for the Prins brought bad luck wherever they went". In conclusion, Ondaatje's attempts at resurfacing the historical past of his family have resulted in the remembrance and discovery of tragedies, scandals as well as memories. ...read more.