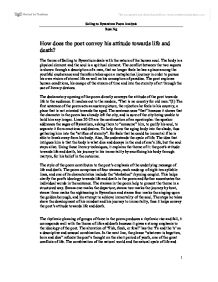 How does the poet convey his attitude towards life and death? The theme of Sailing to Byzantium deals with the nature of the human soul. The body is a physical element and the soul is a spiritual element. The conflict between the two aspects is shown through a description of a man, that no longer feels he has a place among the youthful exuberance and therefore takes upon a metaphorical journey in order to pursue his own vision of eternal life as well as his conception of paradise. The poet explores human conditions, his escape of the stream of time and into the eternity of art through the use of literary devices. The declamatory opening of the poem directly conveys the attitude of the poet towards life to the audience. It reaches out to the readers, "That is no country for old men."(1) The first sentence of the poem sets an austere picture, the rejection he feels in his country, a place that is not oriented towards the aged. The sentence uses "that" because it shows that the character in the poem has already left the city, and is sure of the city being unable to hold him any longer. ...read more.

The rhythmic phrasing of groups of three in the poem produces a rhythmic rise and fall, it corresponds well with the theme of life and death because it gives a strong emphasis to the ideology of the poet. The alteration of "Fish, flesh, or fowl" has the 'f's and the 's' as a descriptive and sensual combination. In the next line, the phrase "whatever is begotten, born and dies" reflects the poet's thought on the short period of youth, one of the great conflicts of life. The combination of the natural world and the natural cycle of life and death, is no different from the human cycle of life. In the last stanza, "Of what is past, or passing, or to come" again shows the clear idea the poet has on life, about the past, present and future. The auditory sensation of consonances in the poem found in lines ten through thirteen, examples such as "unless", "soul", "dress" etc (11.10-13) has a frequent use of "s" sounds from a whispering quality that represent the ascension song desired by a speaker. ...read more.

The cycle of endless life is commonly used in the poem, lines 1 and 2 of the poem "The young In one another's arms,", it describes a vivid image of the young, in lover's arms, the emphasis on the word "young" displays the mortal circle which would not be forever. In line 18, the character in the poem asks the sages to "perne in a gyre," the speaker distinguishes the cynical work of nature and the spiraling work of the spirit, the physical element and the spiritual element. The gyre is constantly moving in new directions. In conclusion, in the poem Sailing to Byzantium, the poem evinces the idea of life and death, either by art or by spiritual ascension, the speaker would attempt to defy the death mandated by the natural world. The nature of the human soul is deeply entangled and there would be no way to escape death, unless the character chooses to transform into a golden bird, mechanical and artificial. The use of literary techniques and devices have help to articulate the themes of the poem. ?? ?? ?? ?? Sailing to Byzantium Poem Analysis Resa Ng 1 ...read more.