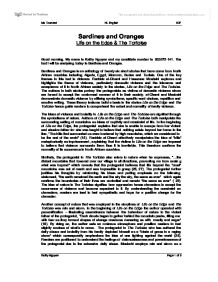 Sardines and Oranges Life on the Edge & The Tortoise Good morning. My name is Kathy Nguyen and my candidate number is 003072-141. The text I will be analysing today is Sardines and Oranges. Sardines and Oranges is an anthology of twenty six short stories that have come from North African countries including Algeria, Egypt, Morocco, Sudan and Tunisia. One of the key themes in this text is violence. Rachida el-Charni and Hassouna Mosbahi explores and highlights the theme of violence, particularly domestic violence and the tolerance and acceptance of it in North African society in the stories, Life on the Edge and The Tortoise. The authors in both stories portray the protagonists as victims of domestic violence whom are forced to accept the conformed manner of it in their society. el-Charni and Mosbahi demonstrate domestic violence by utilising symbolisms, specific word choices, repetition and emotive writing. These literary features build a basis in the stories Life on the Edge and The Tortoise hence guide readers to comprehend the extent and normality of family violence. The ideas of violence and brutality in Life on the Edge and The Tortoise are signified through the symbolisms of nature. Authors of Life on the Edge and The Tortoise both manipulate the surrounding setting of mountains as ideas of captivity and constraint of life. In the beginning of Life on the Edge, the protagonist explains that she is unable to escape from her violent and abusive father for she was taught to believe that nothing exists beyond her home in the line, "The hills that surrounded us were bordered by high mountains, which we considered to be the end of the world" (15). ...read more.

The reader is positioned to understand that the father retains no love nor kindness towards his family who he refers to as "devils" thus emotions of anger is quickly established by the reader (16). Readers are compelled to feel contrasting emotions at the one time - feeling sympathetic towards the children and pregnant mother and angered by the inhumane actions of the father when the author displays the extent that domestic violence can reach to in the line "He unbuckled his belt to give us a thrashing...even my pregnant mother...was not spared" (18). Rachida el-Charni again illustrates the father's abusiveness by explaining that he "hurled insults" towards women by describing them as "spoilt" and "bad luck" and as a result readers develop strong emotions of detest and appal towards the father (16, 18). The author demonstrates to readers the gender insignificance and discrimination in North African countries in the line "Let her die, her life is cheaper than the sheep she's made me lose" (18). The author purposely shows that in some North African countries, animals acquire higher importance and value over people but as a result it causes the fall out of families and permanent damage on sufferers of the situations. The protagonist describes her father as "a man who had no conscience" after he "refused adamantly" to help her mother "give birth" (18). The "shocked" and "ashamed" protagonist later expresses "His wrath and anger had swept away all feelings I [she] held for him and destroyed them...plunging me [her] into a profound state of sadness" (18, 19) ...read more.

Both authors apply emotive writing and repetition of specific word choices in the storyline to develop significant and contrasting emotions for the readers. The authors create the powerful emotions of resent towards the antagonists due to the beating and abuse and sympathy and compassion towards the victims of the excessive domestic violence. Sardines and Oranges is a texts which comprises of various stories that came from North African countries. One of the noticeable recurring ideas of the text is domestic violence and the tolerance of it in North African countries. Rachida el-Charni and Hassouna Mosbahi explores and highlights the idea of domestic violence in Life on the Edge and The Tortoise and also explains several causes behind this "common" manner by establishing that it is somewhat expected in North African society to use violence - it is accordingly acceptable. Although presenting the reasons behind the execution of violence in the stories, both authors were effective in proving that all the reasons that explained, were not significant enough to justify all the inhumane actions. Both Rachida el-Charni and Hassouna Mosbahi effectively creates emotions such as anger, distress and sympathy of readers by utilising various linguistic features. From the storylines and structures of the Life on the Edge and The Tortoise, the readers are able to have an insight on the severity of violence in North African countries furthermore let readers to arise and contemplate on how at times, we take the feeling of belonging and living in a companionable home and the loving relationships in our families all for granted. ?? ?? ?? ?? Ms Townend HL English IOP Kathy Nguyen Page 1 of 3 ...read more.