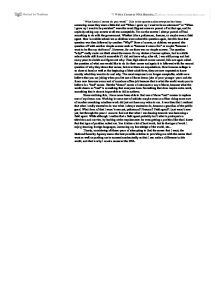 "I Want a Career at NSA Because..." "What kind of career do you want?" This is the question that everyone has been answering since they were a little kid and "When I grow up I want to be an astronaut!" or "When I grow up I want to be president" were the usual flippant answers passed off at that age, and for anybody asking any answer at all was acceptable. For me the answer I always passed off had something to do with the government. Whether it be a policemen, firemen, or maybe even a field agent. Now in middle school we as children were asked this question again, but this time that question was then followed by another: "Why?" ...read more.

Now because college is so close at hand as well as the beginning of their adult lives, they are now expected to know exactly what they want to do and why. The usual response is no longer acceptable, adults now believe that you are joking when you list one of those dream jobs of your younger years and the focus now becomes some sort of mundane office job because that is what the world wants you to believe is a "real" career. Not the "dream" career of astronaut or any of those, because what the world deems as "real" is something that everyone does. ...read more.

While although I realize that a field agent probably isn't what is portrayed on television and movies, by looking at the requirements for even getting a position like that I knew that that type of position suited me. Yes it takes a lot of hard work, but its the type of work I enjoy; learning foreign languages, increasing my knowledge of the world, etc... Thusly, considering all these years of attempting to find the career that I want, the National Security Agency seems the best possible solution to providing me with the career that I want as well as pushing me to succeed academically so that I can make a difference in this world, and that is why I want a career at the NSA. ...read more.