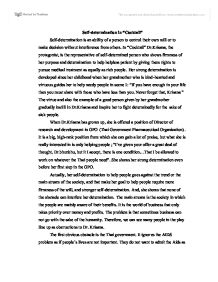 Self-determination in "Cocktail" Self-determination is an ability of a person to control their own will or to make decision without interference from others. In "Cocktail" Dr.Krisana, the protagonist, is the representative of self-determined person who shows firmness of her purpose and determination to help helpless patient by giving them rights to pursue medical treatment as equally as rich people. Her strong determination is developed since her childhood when her grandmother who is kind-hearted and virtuous guides her to help needy people in scene 1: "If you have enough in your life then you must share with those who have less than you. Never forget that, Krisana" The virtue and also the example of a good person given by her grandmother gradually instill in Dr.Krisana and inspire her to fight determinedly for the sake of sick people. When Dr.Krisana has grown up, she is offered a position of Director of research and development in GPO (Thai Government Pharmaceutical Organization). It is a big, high-rank position from which she can gain a lot of praise, but what she is really interested in is only helping people ; "I've given your offer a great deal of thought, Dr.bhunbhu, but it I accept, there is one condition...That I be allowed to work on whatever the Thai people need". ...read more.

When Dr. Krisana first determines to produce the Antiretroviral, which is a treatment for HIV, many people disagrees with the idea. First, the new director, Dr. Likhit is against her and tries to stop her idea with many reason : that the drug is not profitable, it is not reliable because it is made by the Asian, it will be expensive and Thai people would not be able to afford it anyway, the toxic will risk the workers, the drug will jeopardize the Thailand's trade relations with the USA due to the patent rights. It is obvious that Dr. Likhit is only concerned with profits than with patients. However, Dr. Krisana goes on her project in spite of the lack of support. Dr. Krisana asks other staff to help her, but They ask the same question as Dr.Likhit. One of them is afraid that to make the Antiretroviral is too difficult, but Dr. krisana believes that if they try, they can do it, just like they way they already accomplishes other difficult drugs. None of them wants to join her, because they do not believe that it will be successful. However, in scene 10, Dr. Krisana goes on the project on her own, without caring for herself. ...read more.

However, she still doesn't give up. She is still determined to help patients and believes it is morally right to do so. Her decision to go to the Africa to help people there produce drugs shows her love without frontier for people. The minister of health is actually supposed to help her according to the statement he made, but he does not help because he only thinks people already forget about it and that it is not profitable to do help anymore. However, neither the lack of support nor the war in the Africa can stop her from her determination. This shows that her determination to help people pursue drugs equally never stop and that it is strong enough to fly to the other side of the world. It is also strong enough that she resigns from the GPO leaving salary, position for her only determination. Through the whole play, Dr. Krisana has shown her self-determination to help people despite many obstacles lining up to face her. She shows that a person by oneself with self-determinations can change the world to be a better one. The story ends in scene 22, but her determination is not ended, it still motivates her to further help people as her grandmother teaches her ; "If you have enough in your life then you must share with those who have less than you. Never forget that, Krisana" ...read more.