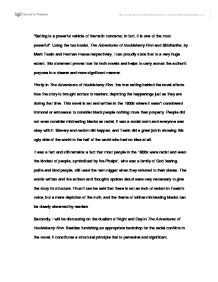 Setting in Huck Finn and Siddhartha

"Setting is a powerful vehicle of thematic concerns; in fact, it is one of the most powerful". Using the two books, The Adventures of Huckleberry Finn and Siddhartha, by Mark Twain and Herman Hesse respectively, I can proudly state that to a very huge extent, this statement proves true for both novels and helps to carry across the author's purpose in a clearer and more significant manner. Firstly in The Adventures of Huckleberry Finn, the true setting behind the novel affects how the story is brought across to readers, depicting the happenings just as they are during that time. This novel is set and written in the 1800s where it wasn't considered immoral or erroneous to consider black people nothing more than property. People did not even consider mistreating blacks as racial, it was a social norm and everyone was okay with it. Slavery and racism did happen, and Twain did a great job in showing this ugly side of the world to the half of the world who had no idea at all. It was a fact and still remains a fact that most people in the 1800s were racist and even the kindest of people, symbolized by the Phelps', who was a family of God fearing, polite and kind people, still used the term nigger when they referred to their slaves. ...read more.

On the river, Twain emphasizes the free and easy nature of Huck, while introducing society and its conformity in Huck's time off the river. When Huck is traveling on the river, he can be and do whatever he wants. It's a completely informal situation, and he doesn't have to change to fit anyone else's rules. He can choose what he does without having to conform to an acceptable practice, even going so far sometimes as to travel on the raft naked because that's what's most comfortable for him. Because of the complete freedom that the river gives Huck, it represents his individuality. It's a place where he can be himself and not have to abide by society's rules. He also doesn't have to accept society's treatment of Jim and other slaves; as long as Huck and Jim are by themselves, they can live without the ideals of civilization. Huck's treatment of Jim on the river is just as it would be toward any good friends, and so without the watchful eye of society, Huck lives the way his true feelings dictate. He doesn't have to grapple with what society thinks he should do until he is faced with having to deal with its views. ...read more.

Everything that he encounters is merely a step in his journey toward finding his identity, and this, the true meaning of the novel, is played out with all of Huck's discoveries about man and the decisions that he makes. Now moving on to the book of Siddhartha, Herman Hesse makes use of the setting to depict the main themes in the novel. The river is the main symbol of completeness in the novel. Siddhartha and Vasudeva venerate it as a cosmic teacher, who binds the two sides of the universe together and links earth to eternity. The great river marks the center of the imaginary geography in Hesse's novel. Siddhartha crosses it several times. At first, when he is still a wandering ascetic (samana), he learns from the river that everything passes away in an endless flow that links life to death in the cosmic cycle of reincarnations. Later on, when he returns to the river as a ferryman, he experiences the revelation that the river has simultaneously contained, since time immemorial, all the nurturing energies and "images" of the world. Thus in conclusion, I can proudly state that through the implementations of an appropriate setting, both Mark Twain as well as Herman Hesse depict their themes in a clearer and more effective manner. ...read more.