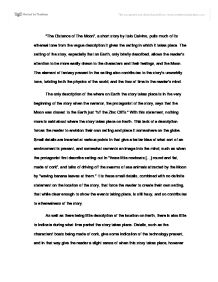 Setting in Italo Calvino's &quot;Distance of The Moon&quot;

"The Distance of The Moon", a short story by Italo Calvino, pulls much of its ethereal tone from the vague description it gives the setting in which it takes place. The setting of the story, especially that on Earth, only briefly described, allows the reader's attention to be more easily drawn to the characters and their feelings, and the Moon. The element of fantasy present in the setting also contributes to the story's unworldly tone, twisting both the physics of the world, and the flow of time in the reader's mind. The only description of the where on Earth the story takes place is in the very beginning of the story when the narrator, the protagonist of the story, says that the Moon was closest to the Earth just "off the Zinc Cliffs." ...read more.

It is these small details, combined with no definite statement on the location of the story, that force the reader to create their own setting, that while clear enough to show the events taking place, is still hazy, and so contributes to etherealness of the story. As well as there being little description of the location on Earth, there is also little to indicate during what time period the story takes place. Details, such as the characters' boats being made of cork, give some indication of the technology present, and in that way give the reader a slight sense of when this story takes place, however similarly to the physical location the details are sparse, and force the reader to place the events taking place in a time of their own inference. ...read more.

The obvious fantasy of men climbing ladders to get to the Moon places this story in a different world than our own. In the setting of the world in this story, the men on the cork boats put up ladders and jump into the Moon's gravity. The fact that this happens offsets the world in the story from our world in the mind of the reader, giving the entire story a feeling of detachment, and adding a tone of otherworldliness to the whole thing, despite its connections to themes of the real world. In a story like this one, the careful crafting of the setting provides a crucial support for the plot. It surrounds the characters, and gives the reader to a world in which to place the abundant imagery present with the Moon, and its magical attraction. ...read more.