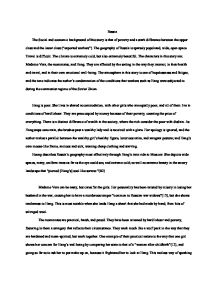 Setting - Russia - Paradise of the Blind

Russia The Social and economic background of this story is that of poverty and a stark difference between the upper class and the lower class ("exported workers"). The geography of Russia is sparsely populated, wide, open space. Travel is difficult. The climate is extremely cold, but also extremely beautiful. The characters in this story are: Madame Vera, the roommates, and Hang. They are affected by the setting in the way they interact, in their health and travel, and in their own emotional well-being. The atmosphere in this story is one of hopelessness and fatigue, and the tone indicates the author's condemnation of the conditions that workers such as Hang were subjected to during the communist regime of the Soviet Union. Hang is poor. She lives in shared accommodation, with other girls who are equally poor, and all of them live in conditions of hard labour. They are preoccupied by money because of their poverty, counting the price of everything. There is a distinct difference of wealth in the society, where the rich consider the poor with disdain. As Hang steps onto train, she brushes past a wealthy lady and is received with a glare. Her apology is ignored, and the author makes a parallel between the wealthy girl's healthy figure, luxurious attire, and arrogant posture; and Hang's own mouse-like frame, anxious and sick, wearing cheap clothing and starving. Huong describes Russia's geography most effectively through Hang's train ride to Moscow. She depicts wide spaces, many, uniform trees as far as the eye could see, and extreme cold; as well as extreme beauty in the snowy landscape that "pierced [Hang's] soul like sorrow."(82) Madame Vera can be nasty, but cares for the girls. Her personality has been twisted by misery in losing her husband in the war, causing her to have a murderous temper "common to Russian war widows"(15), but she shows tenderness to Hang. ...read more.

The roommates are practical, harsh, and proud. They have been wizened by hard labour and poverty, fostering in them a savagery that reflects their circumstance. They work much like a wolf pack in the way that they are hardened and mean-spirited, but work together. One example of their practical nature is the way that one girl shows her concern for Hang's well being by comparing her state to that of a "woman after childbirth"(12), and going so far as to ask her to put make-up on, because it frightened her to look at Hang. This tactless way of speaking may be a way of maintaining either Hang's pride, or her own, in removing any pity from her words. An example of the animalistic way the roommates deal with each other is exhibited in the way they react to the paranoid girl's accusation of theft. They react quickly in anger when their pride is offended by her allegation. While she is obviously no threat to them, they attack her insecurity. They treat her with disgust and contempt because of the weak way she dealt with her anxiety at losing the sewing machine by palming the blame onto them. In turn, Hang exhibits her authoritative position by taking control of the situation. She acts with dignity and firmness when she commands that they search for the lost machine and not disturb the neighbours by making a scene. Because of her past in Hanoi, she has learned to handle adversity more effectively than her roommates. In this way, she is better suited for the ruthless Russian setting than them, and becomes a voice of confidence and authority to them; when she speaks in anger, they listen without argument, "anxious not to annoy [her] any further."(84) The environment is a constant source of unhappiness for all the characters in the story. The excess of space in Russia, and the sparse population means that Hang must travel great distances by train in order to visit her Uncle. ...read more.

This is quite a burden considering her sickness. The harsh climate of cold and snow causes sickness in the exported workers since they can't afford heating. Instead, they spend their time, when not working, "...tucked under [their] covers... drained by fatigue and homesickness."(12). Despite its ruthlessness, the landscape captivated Hang with beauty that "...knows no frontiers, seduces without discrimination."(83). She was very moved by it, because it did not heed human despair or discord; even when things were unsettled inside, outside "....a sense of perfection still permeated the air."(85) As she boarded the train to Moscow, her "spirit" was "soothed" by the sight of the landscape at sunset.(15) The atmosphere in Russia is one of hopelessness and fatigue. Hang and her roommates are overworked and underpaid, always counting money. The first description of Hang's residence includes the smell of "cheap perfume" that clung to "yellowed, peeling walls".(2) Our first description of Hang is one of sickness, and poor humour, after Madame Vera calls her "poor little one", saying how she "really didn't have much luck".(1) This was a form of foreshadowing, inferring that there was more misfortune to be revealed in Hang's past and future. The sense of fatigue is ever present in the Russian setting. Hang is always sleeping, the roommates are always in bed, sleeping off their vacation. Even when Hang is sick, she only thinks of what she needs to get back to work. The tone of the author criticises the oppression in the Communist regime of the Soviet Union. Huong only has to describe the conditions that Hang lives in to be a voice of criticism. Aside from her criticisms of the Soviet Union, Huong has a feministic attitude. This is somewhat illustrated in the way Hang must go to see her Uncle when ill, and more clearly in the description of her friend in Kiev and her friend's uncle, in the way that her friend used men and the way that her friend's uncle made sexual advances upon her. ...read more.