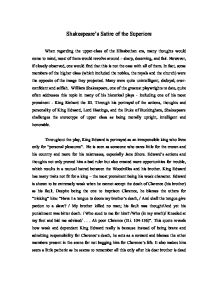 Shakespeare(TM)s Satire of the Superiors

Shakespeare's Satire of the Superiors When regarding the upper-class of the Elizabethan era, many thoughts would come to mind, most of them would revolve around - sharp, deserving, and fair. However, if closely observed, one would find that this is not the case with all of them. In fact, some members of the higher class (which included the nobles, the royals and the church) were the opposite of the image they projected. Many were quite unintelligent, disloyal, over-confident and selfish. William Shakespeare, one of the greatest playwrights to date, quite often addresses this topic in many of his historical plays - including one of his most prominent - King Richard the III. Through his portrayal of the actions, thoughts and personality of King Edward, Lord Hastings, and the Duke of Buckingham, Shakespeare challenges the stereotype of upper class as being morally upright, intelligent and honorable. Throughout the play, King Edward is portrayed as an irresponsible king who lives only for "personal pleasures". He is seen as someone who cares little for the crown and his country and more for his mistresses, especially Jane Shore. Edward's actions and thoughts not only proved him a bad ruler but also created more opportunities for trouble, which results in a mutual hatred between the Woodvilles and his brother. ...read more.

Another example of his gullibility is when Stanley's messenger recites Stanley's dream to Buckingham. In the dream, Stanley sees a boar knocking off Hastings's helmet (Richard represents the boar and the helmet represents Hastings's head). Hastings, in a very ignorant manner, ignores this dream and tells the messenger to return to Stanley and comfort him that nothing like that shall happen: "Tell him his fears are shallow, without instance/ and for his dreams, I wonder he's so simple/ To trust the mockery of unquiet slumber/To fly the boar before the boar pursues/ Were to incense the boar to follow us/ And make pursuit where he did mean no chase. /Go bid thy master rise and come to me." (III.ii.19-31). This quote also shows Hastings's over-confidence, as he believes that Richard really loves and respects him. Hastings then goes on to make a blunder due to great ignorance, over-confidence, pride and ego when he claims to Catesby: "I'll have this crown of mine cut from my shoulders/ Before I'll see the crown so foul misplaced/ But canst thou guess that he doth aim to it?" (III.ii. 42- 45). This part is considered to be Hastings's greatest mistake as he (in complete unawareness of the company and consequences) ...read more.

For our hearts,/ He knows no more of mine than I of yours,/Or I of his, my lord, than you of mine/ Lord Hastings, you and he are near in love. (III.i.v.10- 14). Buckingham is shown as a person who is very influential and powerful but dishonest with words. He is an excellent public speaker who manages to fool the citizens into believing that Richard was the most suitable candidate for the throne. Buckingham is very cunning and will do anything to get what he wants - including murder, disloyalty and backstabbing. Buckingham also shows ignorance when he ignores Margaret's warning about being cheated on by the one he trusts the most, and he later pays for this mistake when Richard betrays him and orders his death. Despite being a nobleman, Buckingham committed many crimes and was not what one would expect of a duke. The belief that the upper class or the noble class is noble in its words, actions and deeds is often just a myth. Because of position, power and wealth in the higher class the undercurrent of betrayals, treachery and subterfuge are more predominant. Shakespeare, in this play provides the audience/reader with satire on this subject through the way present the three characters of noble background. With his representation of the higher class through these three figures, human failings and weaknesses can be found in anyone, noble or otherwise. ?? ?? ?? ?? ...read more.