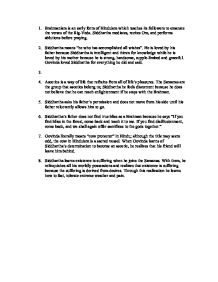 1. Brahmanism is an early form of Hinduism which teaches its followers to emanate the verses of the Rig-Veda. Siddhartha mediates, recites Om, and performs ablutions before praying. 2. Siddhartha means "he who has accomplished all wishes". He is loved by his father because Siddhartha is intelligent and thirsts for knowledge while he is loved by his mother because he is strong, handsome, supple-limbed and graceful. Govinda loved Siddhartha for everything he did and said. 3. 4. Ascetics is a way of life that refrains from all of life's pleasures. The Samanas are the group that ascetics belong to; Siddhartha he feels discontent because he does not believe that he can reach enlightenment if he stays with the Brahman. 5. Siddhartha asks his father's permission and does not move from his side until his father reluctantly allows him to go. 6. Siddhartha's father does not find true bliss as a Brahman because he says "If you find bliss in the forest, come back and teach it to me. If you find disillusionment, come back, and we shall again offer sacrifices to the gods together." 7. Govinda literally means "cow protector" in Hindu; although the title may seem odd, the cow in Hinduism is a sacred vessel. When Govinda learns of Siddhartha's determination to become an ascetic, he realizes that his friend will leave him behind. 8. Siddhartha learns existence is suffering when he joins the Samanas. With them, he relinquishes all his worldly possessions and realizes that existence is suffering because the suffering is derived from desires. ...read more.

"The world was beautiful when looked at in this way- without any seeking, so simple, so childlike." 2. Herman Hesse's Siddhartha plans to mimic Gotama's method of finding enlightenment by listening to a single voice that calls to him. 3. They state that life is a cycle and that everything in it is renewable. The ferrymen predicts that Siddhartha and he will be friends in the future. 4. Everyone is similar to Govinda because they all are submissive, all would like to be friends, all obey, and think little. 5. His inward voice tells him this life is simple and that he can use what he learned as a Samana to reach his goal in this life style. 6. The name Kamala means lotus or goddess of wealth. Kamala wants Siddhartha to attain fine clothes and riches. Siddhartha asking her if he was good enough for her. 7. In "Siddhartha", Herman Hesse insinuates that Siddhartha could force Kamala into teaching him the arts of love. 8. During his time as a Samana, Siddhartha learns to fast, endure extreme weather, and be patient. Kamala advises him to be Kamaswami's equal and not his servant. 9. It is the right to freely believe anything and everything. Siddhartha models this through his belief that he needs to explore his sexuality in order to attain enlightenment. 1. The name Kamaswami means master of love. Siddhartha says that everyone gives and everyone takes; they do not always give possessions but anything that they have. ...read more.

3. Vasudeva states that Siddhartha knows gentleness is strong than severity. 4. Vasudeva knows that sons learn from their own experiences and not the experiences of their fathers because Siddhartha did the same. 5. Siddhartha endeavors to keep his son out of love and that has turned him into an ordinary person. 6. The boy is quite grown and knows that he is doing. Siddhartha returns to the river to learn from it. 7. The right to effort is exhibited in this chapter because Siddhartha attempts to gain his son's love in the chapter. 1. Siddhartha now knows how it feels to love and lose and he understands ordinary people's emotions better because they have gone through it so many times. 2. Vasudeva's face remained peaceful and serene but his body has aged. 3. Siddhartha listens to the river and sees many faces and hears many voices in unison, this is when his Self unites. 4. Vasudeva will reach Nirvana once he goes into the forest. 5. Right to contemplation occurs when Siddhartha sees the unity of all voices. 1. Knowledge can be passed on by teachers but they are not always reliable. Do not actively seek truth because you might miss it. Time does not exist. 2. Everything and anything can be loved for what it is because it does not have to change in order to receive love. 3. Gotama also believes in love because he believes in all the components that make up the feeling of love. 4. Siddhartha gives his friend a glimpse of Nirvana. 5. Herman Hesse's explores the right to ecstasy through Siddhartha's gift of momentarily enlightenment to Govinda. ...read more.