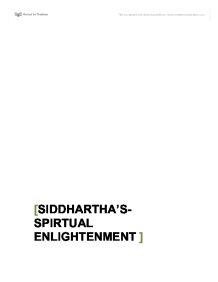 [SIDDHARTHA'S-SPIRTUAL ENLIGHTENMENT ] Hermann Hesse's novel Siddhartha is about a young man named, Siddhartha. He goes through many ups and downs in his search for spiritual entitlement, which is essential to his main goal, Nirvana. In this novel there are three main passages, one at the beginning, middle, and end, that really improve Siddhartha's journey. The first passage is from pg.35. This passage is significant because it is at this time that Govinda and Siddhartha go their separate ways in their own search for understanding life, and this is the first time that Govinda is choosing his own direction, being an individual not in Siddhartha's shadows. They begin with looking for the same search for truth, peace of mind with they believe is essential for having a content or sound relationship with the world. The truth which Siddhartha and Govinda are searching for is a universal understanding of life. Siddhartha and Govinda both have a desire to understand their lives through spirituality, and look to do this by reaching Nirvana. ...read more.

The second passage is on page 99. I think this passage is the key point in significance in Siddhartha's journey for enlightenment because it is at this moment that he realizes that he will not look for truth and enlightenment through teachings. He realizes that he can only find what he is looking for through experience. He understands that enlightenment cannot be reached through teachers because it cannot be taught, enlightenment must come from within you. Siddhartha begins looking for enlightenment by initially looking for external guidance from religions and extremes through Brahmins, Samanas, and Buddhists. When they fall short to bring him the knowledge and guidance he needs, he leaves them for Kamala and Kamaswami for the material world, and again uses an outside source in his search. These sources also fall short to teach him wisdom, and he knows he must now find wisdom on his own. This realization comes from within him. Siddhartha leaves the Brahmins, the Samanas, Gotama, and the material world because he feels personally displeased, not because a person or a religion tells him to go. ...read more.

However the water always returns some way or another. In the same way this can represent Siddhartha because his journey started by the river after he left Buddha, and ended there as well once he became a ferryman. Although he came back changed and filled with knowledge and peace, and was a new person, he was also in ways the same Siddhartha. The river flowed constantly, just as life always does. Life is always changing and growing, and to stop a current of water is like stopping the foreseeable change of life. It's not something that can be done. Siddhartha recognizes this and I believe this is part of the reason why he was so attached to the river. It teaches him that life is forever changing and growing. The river is so important to Siddhartha because every time he goes through his journey to enlightenment from one extreme to another, he always ends up at his river and it provides him with the chance to see inside himself for what he truly wants. ?? ?? ?? ?? ...read more.