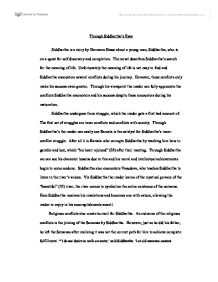 Here Siddhartha receives his revelations and becomes one with nature, allowing the reader to enjoy in his accomplishments aswell. Religious conflicts also create turmoil for Siddhartha. An outcome of the religious conflicts is the joining of the Samanas by Siddhartha. However, just as he did his father, he left the Semanas after realizing it was not the correct path for him to achieve complete fulfillment. "'I do not desire to walk on water,' said Siddhartha. 'Let old samanas content themselves with arts of that kind'." (14) Upon escaping structured religion Siddhartha achieved his initial goal. Once he left structured government Siddhartha was able to find the spirituality he had been searching for. ...read more.

Nothing satisfied his quest for spirituality until he meets Vasudeva, who introduced him to the river, which is where Siddhartha achieves his spirituality. The "beautiful" river is a symbol for life and when he is near it Siddhartha becomes one with life. (55) Despite this recurring conflict, which appears several times throughout the novel, Siddhartha finally finds a solution. Due to his point of view, the reader is able to experience Siddhartha's struggles just as he does. All in all, Siddhartha is the antagonist of the story and the archetypal quester. Through his point of view the reader is able to experience the many quarrels and struggles which Siddhartha encounters and is eventually able to overcome despite negative influences. However, characters like Vasudeva are able to counteract the negative impact of other characters and drive Siddhartha in the right direction on his journey. ...read more.