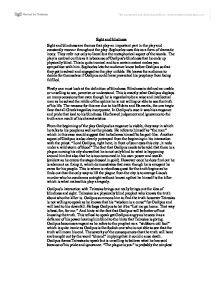 Sight and blindness Sight and blindness are themes that play an important part in the play and constantly reoccur throughout the play. Sophocles uses this as a form of dramatic irony. They refer not only to literal but the metaphorical aspect of the words. The play is centred on this as it is because of Oedipus's blindness that he ends up physically blind. This is quite ironical and to a certain extent makes you sympathise with him. Sophocles lets the audience know before Oedipus so that they get involved and engaged as the play unfolds. He leaves the audience to decide for themselves if Oedipus could have prevented his prophecy from being fulfilled. Firstly one must look at the definition of blindness. Blindness is defined as unable or unwilling to see, perceive or understand. This is exactly what Oedipus displays on many occasions that even though he is regarded to be a wise and intellectual man as he solved the riddle of the sphinx he is not willing or able to see the truth of his life. ...read more.

Oedipus's interaction with Teiresias brings out really brings out the idea of blindness and sight. Teiresias is a physically blind prophet who knows the truth about who the killer is. Oedipus summons him to find the truth however Teiresias is not willing to speak as he knows that his "wisdom is a curse" for Oedipus and will lead to his downfall. He begs Oedipus to let it be "Let me go home. That way is best, for, for me." And hints at the fact that Oedipus will be better off not knowing the truth. This refusal to speak get Oedipus angry as he sees it as a defiance of his power leaving him blind to the hints that Teiresias is giving. Oedipus becomes arrogant as he refers to the prophet as a "stubborn old fool" which is quite ironic as Oedipus is the foolish one who is not able to see that the truth will mean his end. ...read more.

This caused him to stop thinking and he therefore wasn't able to see what was in front of him. This resulted in a lack of self-control that lead to him defying the power of the gods. However the gods got the better of him as fate prevailed even though Oedipus continuously tried to evade it. "He that comes seeing, blind he shall go" refers to Oedipus's fate that he will only be clear-minded when he sees the truth and faces its consequences which ironically can only happen when he is physically blind. There are two ways to interpret Oedipus's last actions. The first is that he blinded himself because he could not bear to face the harsh reality. The other is that he doesn't take the easy way out which would be to kill himself and instead punishes himself and then lives to face the reality which shows his pride once again however he here it is not blinding. ...read more.