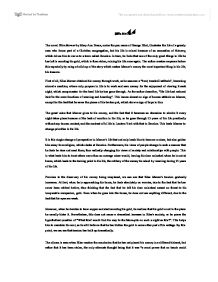 Silas Marner The novel Silas Marner by Mary Ann Evans, under the pen name of George Eliot, illustrates the life of a greedy man who forms part of a Christian congregation, but his life is ruined because of an accusation of thievery, which drives him to move to a town called Raveloe. In here, he finds that one of the only good things in life he has left is counting his gold, which is then stolen, ruining his life once again. The author creates suspense before this especially by using a build-up of the story which makes Marner's money the most important thing in his life, his treasure. First of all, Silas Marner obtained his money through work, as he assumes a "bent, treadmill attitude", becoming almost a machine, whose only purpose in life is to work and earn money for the enjoyment of viewing it each night, which compensates for the hard life he has gone through. As the author describes, "His life had reduced itself to the mere functions of weaving and hoarding". ...read more.

However, when he decides to have supper and start counting his gold, he realizes that his gold is not in the place he usually hides it. Nevertheless, this does not cause a dramatical increase in Silas's anxiety, as he poses the hypothetical question of "What thief would find his way to the Stone-pits on such a night as this?". This helps him to maintain his cool, as he still believes that he has hidden the gold in some other part of his cottage. By this point, we can see that tension has built up dramatically. The climax is seen when Silas reaches the conclusion that he has not placed his money in a different hideout, but rather that it has been stolen, the only alternate thought being that it was "a cruel power that no hands could reach, which had delighted him in making him a second time desolate". This leads him to turn to his only source of happiness at this stage of his life, work. "He turned and tottered towards his loom and got into the seat where he worked, instinctively seeking this as the strongest assurance of reality." ...read more.

He is also rewarded with the presence of Eppie, and an enlarged house, which is courtesy of Godfrey, the true father of Eppie. In conclusion, the author creates suspense before this especially by using a build-up of the story which makes Marner's money the most important thing in his life, his treasure. We can see that Marner becomes a miser because of the fact that it is the only thing that consoles him after being desolate for the first time, when accused of thievery and murder while still living in Lantern Yard. Therefore, the robbery of Marner's money becomes another turning point in his life, which leads him to rethink the way in which he views life, completely changing the symbolic value that he gives to things in life, giving him a whole new perspective. We can also see that Marner strongly links this to a force which he cannot control, thus leading us to think that this very force desires him to change so that he is able to appreciate life and be truly happy. Nevertheless, Marner is able to recover his money after gaining the ability of being truly happy and appreciating life as it is, with or without gold to console him. ?? ?? ?? ?? ...read more.