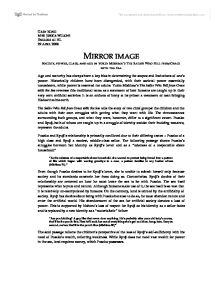 Society, power, age, and class in &quot;The Sailor Who Fell from Grace With the Sea&quot;

While Ryuji does not need vast wealth for power in the sea, land requires money, which Fusako possesses. Mishima employs a study of contrasts in between Fusako and Ryuji. Fusako is the quintessence of the Japanese elite - maternally responsible, wealthy, materialistic and beautiful. Ryuji represents the opposite of Fusako - a symbol of freedom and spirit. Two opposite ends meet in their relationship, and it comes at a high price for both parties. Fusako must abandon her reputation, and Ryuji must abandon his freedom. But the very fact is that these two people are opposites only because of what society has labeled them - something that Mishima emphasizes with abundant detail of their aristocratic and sailing backgrounds in narration. Traditionally, power has been reserved for adults, along with responsibility. Amidst the struggle for power adults have developed a system of class in society. This system of class cause both Fusako and Ryuji's struggles, which limits the extents to which they can achieve self-satisfaction. The children's struggles for power, which are not constrained by adult societal norms, in turn, contrast this. ...read more.

Thus Ryuji's return to the sea represents his return to glory. Although The Sailor Who Fell from Grace with the Sea contains a strong message concerning the dysfunctional nature of society and class, this message is not necessarily a moral one. The inappropriate behavior of the children is left unpunished and without atonement in the plot, which suggests that there is no consequence to murder and rebellion. In fact, the adults who act more accordingly lose, which suggests an unethical backbone to the story. However Mishima's purpose of constructing plot and characterization in this manner is not to encourage immoral behavior, rather to satire how lack of acknowledgement of a group of people can cause potentially fatal repercussions. In true spirit of Mishima's cynicism, human beings have always had a tendency to complicate things for themselves. It is, after all, a virtual universality that there is no ideal state in life - an idea that Mishima conveys in the cracks of Fusako's "ideal" household. At most, what we can do for power is to endeavor to strike a balance between the conformity and individuality portrayed in the adults and children's lives. Worse come to worse, glory will come in its most bitter form: infinite dissatisfaction. ...read more.