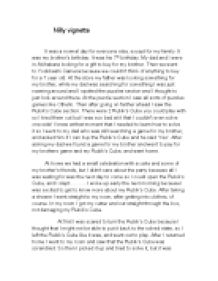 ﻿Nilly vignette It was a normal day for everyone else, except for my family. It was my brother?s birthday. It was his 7th birthday. My dad and I were in Akihabara looking for a gift to buy for my brother. Then we went to Yodobashi Camera because we couldn't think of anything to buy for a 7 year old. At the store my father was looking something for my brother, while my dad was searching for something I was just roaming around and I spotted the puzzles section and I thought to just look around there. At the puzzle section I saw all sorts of puzzles games like Othello. Then after going on farther ahead I saw the Rubik?s Cube section. ...read more.

At home we had a small celebration with a cake and some of my brother?s friends, but I didn't care about the party because all I was waiting for was the next day to come so I could open the Rubik?s Cube, and I slept???. I woke up early the next morning because I was excited to get to know more about my Rubik?s Cube. After taking a shower I went straight to my room, after getting into clothes, of course. In my room I got my cutter and cut straight through the box, not damaging my Rubik?s Cube. At first I was scared to turn the Rubik?s Cube because I thought that I might not be able to put it back to the solved state, so I left the Rubik?s Cube like it was, and went out to play. ...read more.

Several results popped up, but I picked a YouTube video thinking it would be the easiest to understand, and I was correct. So for a few days I sat in front of the computer trying to remember all the algorithms. It took me until July to remember all the necessary algorithms to solve the Rubik?s Cube. Which is nearly 5 months, and I felt really ashamed of that. It was summer vacation at the time I finally learnt all the necessary algorithms for the Rubik?s Cube and there was nothing else for me to do. So I looked up some bigger and harder to solve Rubik?s Cube, and I saw that there were much bigger Rubik?s Cube then the one I owned so I felt like I needed to get those, but that was a long time away?. ...read more.