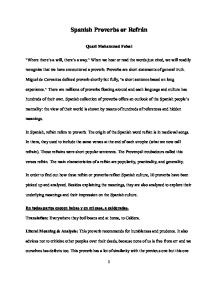 Spanish Proverbs or Refrn. n order to find out how these refrn or proverbs reflect Spanish culture, 10 proverbs have been picked up and analyzed.

Spanish Proverbs or Refr�n Quazi Mohammad Faisal "Where there's a will, there's a way." When we hear or read the words just cited, we will readily recognize that we have encountered a proverb. Proverbs are short statements of general truth. Miguel de Cervantes defined proverb shortly but fully, "a short sentence based on long experience." There are millions of proverbs floating around and each language and culture has hundreds of their own. Spanish collection of proverbs offers an outlook of the Spanish people's mentality: the view of their world is shown by means of hundreds of references and hidden meanings. In Spanish, refr�n refers to proverb. The origin of the Spanish word refr�n is in medieval songs. In them, they used to include the same verses at the end of each strophe (what we now call refrain). Those refrains were short popular sentences. The Proven�al troubadours called this verses refr�n. The main characteristics of a refr�n are popularity, practicality, and generality. In order to find out how these refr�n or proverbs reflect Spanish culture, 10 proverbs have been picked up and analyzed. Besides explaining the meanings, they are also analyzed to explore their underlying meanings and their impression on the Spanish culture. ...read more.

Literal Meaning & Analysis: This proverb indicates that it's vain to attempt hiding defects or blemishes. It is of no use since such defects will be discovered sooner or later and in that case, we will actually make a full out of ourselves. A parallel English proverb goes which is- "You can't make a silk purse out of a sow's ear." It's interesting that the proverb refers not to just physical defect. It refers to the moral defects as well. In another sense it also indicates the desire of showing off what we are not. As a nation, the Spanish are well educated, they work hard and they show honesty on their deeds. Therefore, this proverb can be considered as a warning for those who love to show off. No te quites el gab�n, hasta que llegue San Juan Translation: Do not take off his overcoat, until you reach San Juan Literal Meaning & Analysis: This proverb asks to wear warm clothes until the St. John's Day, June 24th, since weather in Spain remains very unstable and people may need them. However, this proverb means more than just keeping someone warm. St. John's Eve is the most celebrated event of summer in Spain and interestingly it's also the shortest night of the year. ...read more.

If the person who doesn't eat complains because there is not much food or there is none, the rest use this proverb. But generally, it refers to those who get distracted and do not do their work well. It's interesting that a large number of Spanish proverbs are related to foods and drinks, though those proverbs have underlying meanings. And most of those proverbs actually attack the greed and such other characteristics of human nature. This proverb is a good example of that. Lentejas, si quieres las comes y si no, las dejas Translation: Lentils, if you want to eat them and if not, let Literal Meaning & Analysis: This proverb is said when a plateful of lentils is seen and literally means if you see it, then take it otherwise not. But generally this refers to the times when people are obliged to do something. It also means that if you do not take what you are offered, eventually you will get nothing. There is a close English and Bangla proverb- "Something is better than nothing" and "??? ????? ????? ???? ???? ????". The above mentioned proverbs are moral or sentimental in nature. Moreover, they are the result of experience, so they have a practical value as well. They show the social behavior, the moral concepts, the natural resources and many more practical and useful details of Spanish people for everyday life. 1 ...read more.