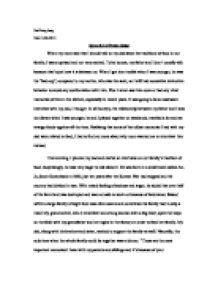 Spoonful of potato salad. When my mom said that I should talk to my dad about the traditions of food in our family, I was surprised and not very excited.

DaeYong Jang Date: 2-08-2012 Spoonful of Potato Salad When my mom said that I should talk to my dad about the traditions of food in our family, I was surprised and not very excited. To be honest, my father and I don't usually talk because that's just how it is between us. When I got into trouble when I was younger, he was the "bad cop", compared to my mother, who was the saint, so I still had somewhat instinctive behavior to avoid any confrontation with him. Plus I never saw him cook or had any vivid memories of him in the kitchen, especially in recent years. It was going to be an awkward interview with my dad, I thought. In all honesty, the relationship between my father and I was not distant when I was younger; he and I played together on weekends, traveled a lot and ate strange foods together all the time. Realizing that some of the oldest memories I had with my dad were related to food, I had to find out more about why mom wanted me to interview him instead. ...read more.

On a good day, there would be an egg side dish as well. The meal itself didn't mean much to my father, but I could sense a grin on his face when he recalled those memories. He said it was the not the food that made him smile, but the memories with his family. The times when his brother got an F on a test, when his sister got a boyfriend for the first time... I then realized that this was also true for me. When I asked him about a special food that was specific to our family, he wasn't sure that there was one. He said that the family food was just what the family made. This was somewhat understandable, because the way you make Korean food, or any other foods, there were not many options that can make it 'unique to one family' unless it was created from scratch. So I altered my question slightly and asked what foods my family enjoyed cooking together, since that seemed to be where the interview was headed. ...read more.

As I discovered, food is more of an instrument to bring family together, rather than just a meal, especially in my family. Now that I think about it, back when my family ate together more, we were closer to each other. Unfortunately, these days, even if my family is together, we eat either separately or so fast, because of our schedules, that we don't get to talk. Now, in present time, I live on a college campus, basically alone, and wake up to have cereal or ready-made chicken noodle soup. During lunch, I usually just pick up fast-food sandwiches and fries between classes. When dinner comes around, I find myself munching on ramen noodles or more fast-food. Food nowadays has become more of an inconvenience that is dealt with in as little time as possible, so that I can go to my next class or next activity. After this conversation with my father, I came to the conclusion that the faster we eat and the less time we spend preparing meals, we will have less human interaction in our lives. ...read more.