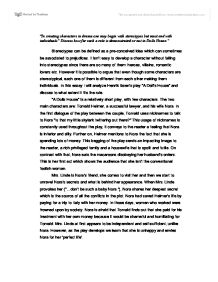 "In creating characters in drama one may begin with stereotypes but must end with individuals" Discuss how far such a rule is demonstrated or not in Dolls House." Stereotypes can be defined as a pre-conceived idea which can sometimes be associated to prejudices. It isn't easy to develop a character without falling into stereotypes since there are so many of them: heroes, villains, romantic lovers etc. However it is possible to argue that even though some characters are stereotypical, each one of them is different from each other making them individuals. In this essay I will analyze Henrik Ibsen's play "A Doll's House" and discuss to what extent it fits the rule. "A Dolls House" is a relatively short play, with few characters. ...read more.

When Mrs. Linde provokes her ("...don't be such a baby Nora."), Nora shares her deepest secret which is the source of all the conflicts in the plot. Nora had saved Helmer's life by paying for a trip to Italy with her money. In those days, women who worked were frowned upon by society. Nora is afraid that Torvald finds out that she paid for his treatment with her own money because it would be shameful and humiliating for Torvald. Mrs. Linde at first appears to be independent and self-sufficient, unlike Nora. However, as the play develops we learn that she is unhappy and envies Nora for her 'perfect life'. From the moment we learn about all of the deceptions that have been taken place in the family, we start to look at Nora with other eyes. ...read more.

Now, Helmer abruptly changes his mind and forgives Nora, this shows that he is a shallow and selfish man who is only concerned with his image. Instead of remaining happy with her husband accepting her again, Nora unexpectedly says to Torvald "I have a lot to talk to you about". The dialogue which follows this is the most important one in "A Dolls House". Nora assumes a serious posture unlike the rest of the play and she criticizes Helmer and their life together "...our home has been nothing but a play-room". This is the key moment, it represents the breaking of the stereotype, Nora frees herself from the standard woman concept. Before, she had to sacrifice her dreams and her will to be accepted but now she leaves the ones she love to follow her dreams and find her own identity. Nora is unique and she cannot be considered stereotype because she opposes the society moral standards. . ...read more.